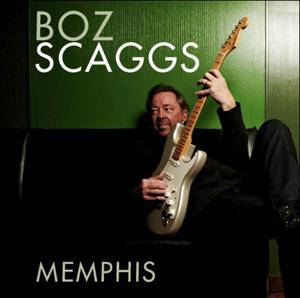 Plano native Boz Scaggs has had one of pop music’s longest and most varied careers. Beginning during the Summer of Love with fellow Texan Steve Miller, Scaggs moved from psychedelic blues to Van Morrison-influenced soul rock to late-70s disco-era superstardom via his near perfect Silk Degrees album. Once the hits dried up in the early-80s, he stepped off the pop music treadmill and opened his Slim’s nightclub, which remains one of the premier venues in the Bay Area. In the mid-90s Scaggs returned to music and performing, initially as a featured performer in Donald Fagen’s Rock and Soul Revue and eventually releasing a series of low-key but satisfying albums exploring his roots as a performer.

Memphis is the latest installment, and it’s a pretty great one. Taking its title from the city where it was recorded, Memphis is, appropriately, all about the groove. Produced by Steve Jordan, who also mans the drum kit, the album is built around the core band of Scaggs, Jordan, the great Willie Weeks on bass, and the “Ghostbuster” himself, guitarist Ray Parker Jr. (who began his career as a session guitarist and has worked with Scaggs since the ’70s). Adding to the groove are legendary session players Spooner Oldham and Charles Hodges, best known for his work with Al Green. In fact, the specter of the Rev. Green looms large over Memphis, which was recorded in three days at Royal Studios, where the late Willie Mitchell produced Green’s ’70s masterworks. Hodges adds his unmistakable organ work to Scaggs’ take on Green’s “So Good to Be Here,” making it one of the standouts of the set. Others include two songs associated with the late Willy Deville, “Cadillac Walk” and “Mixed Up Shook Up Girl,” and a great version of Steely Dan’s “Pearl of the Quarter” that makes one want to hear a whole record of Scaggs covering the Dan. But until Scaggs gets around to that gem waiting to happen, Memphis hits the spot as exactly the kind of “throwback” album more established artists of his kind should aspire to: low key, grooving, and playing to the strengths of the artist, with nary a care about the commercial fate awaiting it. — GREG ELLIS