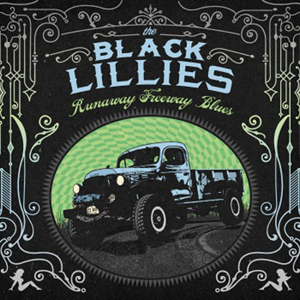 Knoxville, Tenn.’s the Black Lillies reached admirable heights with their 2011 album, 100 Miles of Wreckage, showcasing a nice flair for country-noir with an acoustic, rootsy spin, and the new Runaway Freeway Blues continues in much the same vein albeit with a little bit more rockin’ propulsion in the tank. “The Fall” opens the album with a gentle lope, with lead-singer Cruz Contreras and fellow vocalist Trisha Gene Brady harmonizing to sweet effect. Those same tight harmonies remain prevalent throughout, even on plugged-in rock tunes like the driving “Ruby” and “Ramblin’ Boy” (the latter of which also features some of the most emotively employed pedal steel guitar that the Americana world will likely be treated to all year.) Lyrically, the stories being told here aren’t necessarily groundbreaking, but they’re still worthy of following — especially “Catherine,” an all-too timely and relatable tale of a soldier simply looking back and looking forward to getting home. And like many of the songs on the album, that one’s imminently easy to sing along to, too. Far too often, bands are considered “edgy” when they reach for drastic extremes. The Black Lillies may not go that far out of their proven comfort zone, but they’re still progressive in the subtle way they broaden boundaries for the sake of making great songs. — KELLY DEARMORE