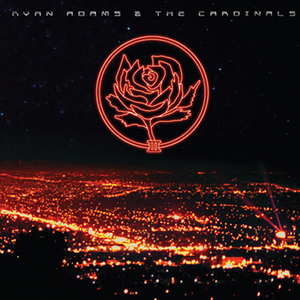 Let’s get this out of the way upfront: Ryan Adams & the Cardinals’ III/IV is not, as promotional materials assert, a trifle of a concept album “about the ’80s, ninjas, cigarettes, sex and pizza.” Fresh off the release of the extremely limited edition Orion, his self-described “fully-realized sci-fi metal concept album,” it certainly seemed reasonable that Adams would release a TMNT-themed hodgepodge of castoffs recorded at the famed Electric Lady Studios in 2007 during a marathon six-month session rumored to yield 60 tracks. Some of those tracks were issued as his last release with the Cardinals, 2007’s rather laid back Easy Tiger, but fans who have stuck with Adams throughout his career have come to expect the unexpected (and often downright puzzling) from him with each new release. But the biggest surprise of all about III/IV is that it’s arguably one of most mature albums Adams has ever made.

A critical darling since his days with the seminal alt-country band Whiskeytown, Adams’ image had shifted over the course of an eight-album contract with Lost Highway from prolific wunderkind to loveable screw-up to allegedly insufferable addict. But, freed from his contract with Lost Highway and more importantly, from a long-time haze of drug and alcohol abuse, a newly sober Adams has emerged with what can be considered the most focused and personal release of his career. While the album is in the same sonic realm as his two 2003 releases (the guitar-churning New Wave of Rock N’Roll and the mopey ’80s Brit-pop of Love is Hell), III/IV is the sound of an artist seeking redemption for, rather than wallowing in, past transgressions. That means listeners hoping for light-hearted ’80s fare from an album that boasts song titles like “Kissers Start Wars” & “Star Wars” can take solace only in the hidden snippet at the end of “Kill the Lights” where Adams rhymes Wookie with fortune cookie. Everything else is pretty heady stuff — albeit catchy as hell.

From the Killers-meets-Muse opener “Breakdown Into the Resolve” to the spastic closer “Kill the Lights,” a frantic tempo is set that at first obscures the emotional depth of the songwriting but eventually serves to highlight a sense of controlled chaos. “Breakdown Into the Resolve” leads with Adams bringing the audience up to speed: “So you probably heard I went away/Where do we start?/I know, from the breakdown.” Songs with bouncy beats, seemingly influenced by some cross-pollination of ’80s hair-rock bands, ’70s garage punk and modern indie-rock, drown out very personal revelations of rebirth and rediscovery in the wake of shaking off nearly three decades of self-abuse. It’s kind of a win-win catch 22: You can either take in the full gravity of the lyrics (easily among the best of Adams’ career), or you can just surrender to the hooks (ditto); but following both at once can be a compelling challenge.

“Wasteland” splits evenly into two halves, one describing a crumbling relationship between Adams and his drugs (a theme echoed throughout the album), and the other finding a defiant Adams chanting “It’s your wasteland/you have it,” over a background chorus of distant voices echoing, “Whatever you take is supposed to make you happy/Until you’re all alone and don’t know what you take it for.” “Lovely and Blue” is a mesmerizing track of reaffirmation, with Adams triumphantly declaring to an icy mistress “My world is gonna revolve/It’s gonna keep spinning ’round me, doll.” “Happy Birthday” throws a nice little sweeping orchestra over the trashed, dejected birthday boy’s recognition of his flaws. “The Crystal Skull,” dripping with alcoholic melancholy beauty, would fit right in on Love is Hell. On “Numbers,” which sounds like three distinctly different songs in one, Adams describes the need to rid himself of connections he no longer needs.

I could keep listing high points (“Sewers Within a Wishing Well,” “Ultraviolet Light,” etc.), but frankly, the whole double album is chock full of them. Suffice it to say that the grand finale of “P.S.,” “Death and Rats” and “Kill the Lights” closes the loop with Adams emphatically ridding himself of his demons and affirming “this dream is mine/and it’s going to survive.” At this point, it’s tempting to welcome Mr. Adams back, but he’s been gone for so long, it’s probably more appropriate to just welcome him. — ZACH JENNINGS