The Derailers: “Live! From Texas” 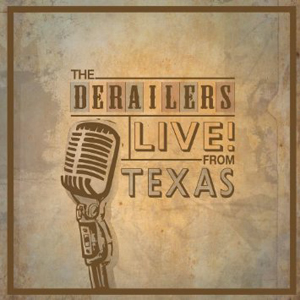 The Derailers may have called their latest release Live From Texas, but they’d be the first to acknowledge their sound owes far more to a different state: California. Bakersfield, to be exact — the land of Buck Owens, whose honky-tonk legacy continues to inspire bandleader Brian Hofeldt and his mates. They’ve even included a fine cover of Owens’ “Who’s Gonna Mow Your Grass” here. But their Beatles and Everly Brothers influences also stand loud and proud on this disc, recorded at Gruene Hall and Dan’s Silverleaf in Denton. The Everlys cover, “You’re My Girl,” with its high harmonies and low bass, is a standout; the guitar ballad “Alone With You,” which Hofeldt co-wrote with Dale Dodson and Billy Lawson, is another. But the tunes most likely to serve as catalysts for the band’s nightly goal —  “[to] keep people dancing, get ’em drunk and get ’em laid” — are the rockabilly cut, “Hey Valerie,” and the Elvis-ish “Knee Deep in the Blues,” a rip-roarin’, balls-out honky-tonk rocker. If you wanna get derailed and nailed at home, they oughtta do the trick. — LYNNE MARGOLIS

Previous post The Roadhouse Rant: Thomas Jefferson was such a bad ass