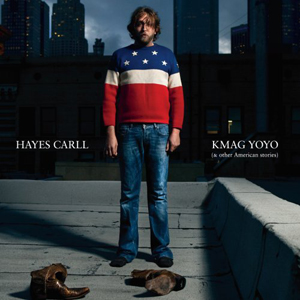 Hayes Carll has nailed three straight bull’s eyes. Score another. The Woodlands native’s ambitious KMAG YOYO (& other American stories) — a seamless collection that sketches all the regret and reward “between the highway and the moon” — proves his fourth winning album and second consecutive masterwork, delivering mightily in his catalog’s clean-up position.

Briefly chart the progression: Carll’s vibrant vignettes evolve from coffeehouse folk (2002’s Flowers and Liquor) into bristling barrelhouse country (2004’s Little Rock) and a nearly perfect synthesis that combines the two (2008’s Trouble in Mind). Along the way, he scores a regional hit with the stream-of-consciousness anthem “Down the Road Tonight,” picks up an Americana Music Association award for 2008’s Song of the Year and scores a hearty endorsement from high-profile radio personality Don Imus (both nods for Trouble in Mind’s brilliant “She Left Me for Jesus”).

Meanwhile, he’s toured ceaselessly for a decade. That’s important here, because the 34-year-old’s KMAG YOYO — that’s military speak for “Kiss my ass, guys, you’re on your own” — deftly traces the journey. Carll snapshots the wonder (“Grand Parade”) and wear (“Hide Me Babe”) and sacrifices made to get there (“The Letter”). Every bend’s sunrise resignation (“Chances Are”) welcomes evening affirmation (the Cary Ann Hearst duet “Another Like You”). At heart, protagonists look far (“The Loving Cup”) and wide (“Stomp and Holler”), but keenly recall routes back home (“Grateful for Christmas”). And the glorious Celtic romp with kindred spirits Corb Lund and Todd Snider (“Bottle in My Hand”) freezes closing times in between.

As always, Carll’s self-effacing humor fortifies his finest. “Everybody’s talking about the shape that I’m in/They say, ‘Boy, you ain’t a poet, just a drunk with a pen,’” he sings on “Hard Out Here,” a tongue-in-cheek double down on the last album’s high watermark, “Drunken Poet’s Dream.” “It gets hard out here, I know it don’t look it/I used to have heart, but the highway took it.” You’ve witnessed Carll’s charm in motion: Wisdom sneaked in behind wit. It’s no accident that the Austin City Limits television series recently split him on a bill with sagely satirist Robert Earl Keen.

The two artists’ paths parallel nicely. While Little Rock suggested Carll as a rising alt-country star (like, say, West Textures) and Trouble in Mind boosted him as widespread news (Picnic), KMAG YOYO might be his Gringo Honeymoon, a categorical success that separates his singular discography into before and after. Everything works across the board. Seriously splitting hairs, his past albums slightly watered down peaks (“Lost and Lonely,” “Hey Baby Where You Been”) with arguable valleys (“Barroom Lament,” “Good Friends”). But KMAG YOYO allows no such debate.

Many critics will focus on the sociopolitical title track, a loose update to Steve Earle’s “Copperhead Road.” Fine, but pay equal attention to “Bye Bye Baby.” The mundane title cloaks Carll’s most perfectly crafted story song yet, a circular study in creative writing on par with Townes Van Zandt’s “Don’t You Take It Too Bad” or Carll’s own “Beaumont.” “Now there’s an emptiness standing at the door/Trying to take me back to the way I was before,” Carll sings. “I used to feel lonely, but it’s not that way no more.” Perhaps that’s a man reconciling life divided by perpetual motion. — BRIAN T. ATKINSON