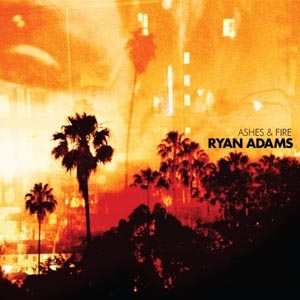 A new Ryan Adams album always carries with it an interesting subplot of sorts: Namely, what exactly was the mercurial, often chameleonic artist listening to while writing and recording? After all, it’s no secret that Adams wears his muses on his sleeve, and those muses change from album to album. Still, even knowing that one should always expect the unexpected with this guy, the soft warmth of Ashes & Fire comes as quite a jolt following the Kiss homage and ’70s-style riffage displayed across his last release, 2010’s double-disc III/IV.

Many longtime Adams fans would cringe at the notion that the word “restraint” could play an integral role in a review of his work. It simply has never been in Adams’ playbook to ease off the pedal when he could hit a sharp turn at full speed. Even his more laid-back albums have been dipped either in layers of whiskey or sarcasm, so the tender earnestness that comprises Ashes & Fire is truly groundbreaking. While there’s the urge to relate it to Adams’ iconic solo debut, Heartbreaker, or even his Whiskeytown releases, those albums oozed youthful exuberance and offered sonic surprises that simply aren’t found here. Both musically and lyrically, the tone of Ashes & Fire is a lot closer to 29, Adams’ somewhat overlooked somber reflection on his fast-paced, hard-partyin’ 20s.

On its own merits, Ashes is a success. A focused, sober, and (perhaps most evident) content-in-life Adams has released a charming album of delicate, often minimalist acoustic tunes. Openers “Dirty Rain” and “Ashes & Fire” begin things in fine fashion. In particular, the former would make a nice change-of-pace ballad on Heartbreaker. With his gentle acoustic guitar accompanied by equally gentle piano and barely-there percussion, Adams’ moody vocals and evocative images take center stage. From there, though, things slow down to a snail’s pace on “Come Home” and “Rocks,” with Adams’ voice reduced to a hushed whisper. The immediately accessible and introverted “Invisible Riversides” and “Lucky Now” manage to be pleasant enough ballads to be tossed on repeat while getting dressed in the morning. And ultimately, that’s what makes Ashes seem a tad too soothing. An artist whose output used to be the perfect soundtrack for “anything-goes 3 a.m.” has now produced the perfect complement to the first Starbuck’s latte of the day.

There are jolts here, but they’re not exactly caffeinated. Where dramatic flair once ruled, subtlety is king on Ashes. “Do I Wait” is a perfect little rumination on uncertainty in relationships. With softly swirling, ethereal atmospherics in the background and one of the album’s true sonic crescendos, it’s the one Ashes song that would have sounded right at home on Adams’ gorgeously riveting Love is Hell. Dueting with Norah Jones, “Kindness” could have easily sunk under the weight of gross sentimentality, but the sincerity is impossible to ignore and the song shines.

Overall, it’s very pleasant album, with hints of true inspiration, but what it lacks — a true dramatic anchor — is critical. If Adams albums were women (and why not?), then Ashes is an attractive but comfortably conservative soccer mom, worlds removed from the kinky sexual dynamo of Heartbreaker, the up-for-anything Gold and even that beautiful muse of unrequited love, Love is Hell. It’s a warm and sincere effort that is unlikely to offend newcomers, but longtime fans are bound to miss the melodic curveballs, dramatic bridges and swelling choruses that always made Adams seem to titter on the cusp of creating something new or losing himself while trying. Maybe this is just the sound of Adams catching his breath, or enjoying a long-overdue sigh of contentment. And maybe, if one were to compare him to an artist like Neil Young (which I do without reservations), Ashes & Fire will ultimately be looked back on as his very own Harvest. I just hope he’s still got some Crazy Horse left in him. — ZACH JENNINGS

Next post Drew Kennedy: "Fresh Water in the Salton Sea"