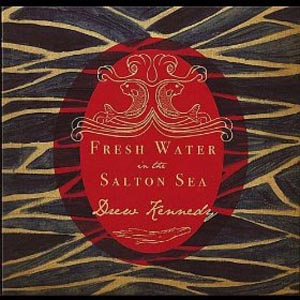 Drew Kennedy’s fifth album, Fresh Water in the Salton Sea, comes with the disclaimer that it’s meant as a “companion piece” to his new (and first) novel of the same name. That’s cool and all, but it’s also kind of like sticking the listener with a homework assignment, so here’s the Cliff’s Notes on the book: A 30-year-old, New Braunfels-based singer-songwriter chronicles a three-week solo tour across the Western United States, all the while running from the ghost of a broken relationship and ruminating on why he picked the guitar over law school. The songs he writes on the journey are the ones on the album, and said songwriter just happens to share Kennedy’s affection for joints like New Braunfels’ Phoenix Saloon and San Angelo’s Blaine’s Pub (and especially its late owner, Blaine Martin), but we know this is all fiction and not autobiography because the songwriter’s name is “Daniel Murphy” (see what Kennedy did there?), and Murphy can’t grow a beard.

For the record, it’s a good read, especially for Kennedy fans and/or anyone interested in what life on the road is like for a solo artist. But it’s not really essential for “the record” — at least not any more so than any batch of well-written songs requires a minutely detailed account of every encounter, conversation or epiphany that might have directly or indirectly inspired them. The 10 songs on Fresh Water all riff in one way or another off the novel’s central “what’s it all about, anyway, and am I really doing the right thing with my life?” theme (“I can’t see the sunshine for the rays,” he frets on the gospel-tinged opener); but there’s no concept-album storyline to keep up with or get in the way of the music. Kennedy’s voice and melodies are exceedingly easy on the ears, strongly reminiscent of ’70s singer-songwriter fare (more Nilsson, Schmillson or Sweet Baby James than Waylon and Willie), but the wistful “Vapor Trails” goes down like prime Whiskeytown, and “I’ve Got Some Leaving to Do” blurs the line between country weeper and 2 a.m. blues. The toe-tapping “We’ve All Got Our Marks to Make” serves as the album’s rousing centerpiece, and also hints at why Kennedy probably felt compelled to explore long-form fiction in the first place; he stuffs so many words in the verses, he can barely keep up with himself. But he pulls it off with a devil-may-care verve. “Line by line and age to age,” he sings in the chorus, “we’ve all got our marks to make.” And with Fresh Water in the Salton Sea, he’s made a fine one — with an entire book’s worth of words to spare. — RICHARD SKANSE