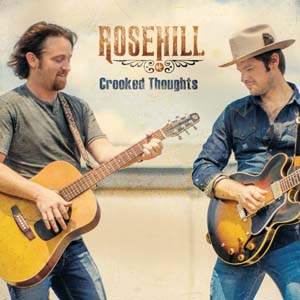 Rosehill, the Houston-based duo comprised of Mitch McBain and Blake Myers, are developing a promising trend that establishes them as an act that reliably produces solid records. Granted, reliable and solid may not be sexy, but sexy, as it does in a romantic relationship, often fades quickly. Building upon their attention-grabbing debut, White Lines and Stars, McBain and Myers stick relatively close to the formula of tight harmonies and dramatic flourishes that manage to keep most songs on the agreeable side of melodrama. “The Bible and the Gun” is a fine example of a song that grabs the cochlea and insists you listen closely instead of merely waiting to sing-along with the irresistibly hooky chorus. The polished production of Jay Clementi certainly compliments the rock-driven tunes as the occasional pedal steel cries just enough to provide the album with country flair; a raw, rugged album, this ain’t. Nor is Crooked Thoughts a shoot-out-the lights party album; it’s much more of a slow sipping affair. Such a distinction is an important one, as only a collection of songs that have been thoughtfully written can make someone put down the shot glass and Patron for a highball and bottle of the brown stuff. — KELLY DEARMORE

Previous post Ronnie Fauss: "I Am the Man You Know I'm Not"