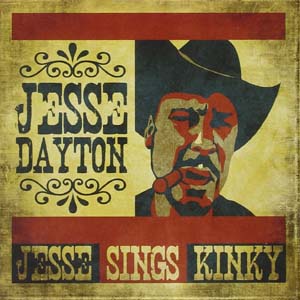 Tribute records are always something of a dicey prospect. Can the interpreter transcend the original? A lot of times, that comes down to the listener’s relationship to both the interpreter and the interpreted. For me, Kinky Friedman is a larger-than-life personality whose music is one facet of that but never the most important. On his ninth solo album, Jesse Sings Kinky, Jesse Dayton has the unenviable task of making me forget Kinky the icon and concentrate on Kinky the songwriter. The pros and cons of this approach can be found on his covers here of two of Friedman’s best songs, “Rapid City, South Dakota” and “Sold American.” Dayton transforms the former into a chugging Southeast Texas honky-tonk gem but misses the nuances of the latter completely by taking it at too fast a tempo. He also seems oddly detached from the lyrics. Far more successful is “Twirl,” which Dayton reimagines as a Tex-Mex tune — an inspired move that broadens the scope of the tune about escaping a small town: It ain’t just for white girls anymore. Overall though, Dayton seems determined to make us appreciate what a “serious” songwriter Friedman is, but re-contextualizing him as a peer of Townes or Billy Joe misses a very significant aspect of what makes Kinky kinky. Where is “Ride ’Em Jewboy,” Friedman’s magnum opus that somehow manages to successfully compare the Holocaust to a cattle drive? If you want us to respect Kinky as a songwriter, why omit his greatest song? Kinky’s an unabashed jokester, so how bout a chuckle or two? Granted, the singing and playing is as impeccable throughout as you would expect from a veteran like Dayton. And no doubt the album will serve its purpose in introducing a whole new audience to Kinky the songwriter. But by leaving the Kinkster’s lighter side by the wayside, this tribute is more of a well-drawn sketch of Friedman rather than the full color portrait he deserves. — GREG ELLIS