Ronnie Fauss: “I Am the Man You Know I’m Not” 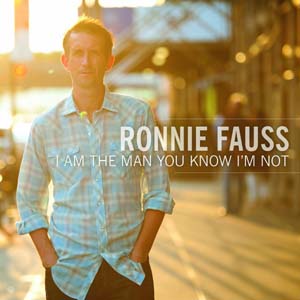 Although he’s been kicking around the Dallas area for a few years now and has a handful of EPs under his belt, Ronnie Fauss is a relative newcomer to the wider Texas/Americana scene. But on the evidence of his full-length debut, I Am the Man You Know I’m Not, he merits a spot on any shortlist of rising troubadours worth paying serious attention to. Hell, he earns that with “This Year” alone. It’s the kind of family snapshot guys like Robert Earl Keen, Slaid Cleaves, and Hayes Carll all excel at, and it’s on the level of their best — with a three-sheets-to-the-wind chorus that’s spiked with just enough cautious optimism to take the edge off of a New Year’s Day hangover: “I’ve never had anything quite like the year/That I know I will have this year.” There’s also just enough grit in his voice to lend a credible blue-collar edge to his city-boy wit (“I’m a Democrat who rides around in a big old SUV,” he mocks himself in the terrific “Pistols in the Air”) without coming off as the least bit contrived. Stylistically, he’s as convincing delivering sad-eyed honky-tonk laments (“I Can’t Remember (What You Can’t Forget)”) and Gram Parsons covers (a sterling “Sin City,” featuring lovely female accompaniment by Lilly Hiatt) as he is kicking his way through up-tempo Americana (“A Pretty Nice Night for Houston.”) That last tune is a bit of a dead-ringer for another Dallas maverick, Jack Ingram — as in the old-school Ingram from his Beat-Up Ford Band days, not the latter-day mainstream contender. About the only misstep on the whole album is the opening “The Night Before the War,” which undercuts a killer, bittersweet verse and chorus melody with too much gratuitous, spit-shined fiddle. That kinda stuff might getcha on the Texas Music Chart, but Fauss is clearly better than that — no matter what he insists with that album title. — RICHARD SKANSE