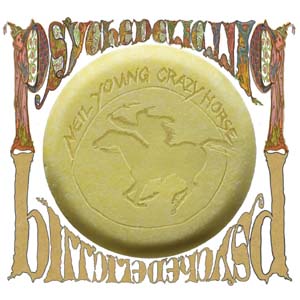 To hear Neil Young described as a “legacy” or “classic rock” act is weird, because few artists wearing those tags are making new music at all, much less taking chances or revitalizing tried-and-true styles. And few sound as dynamic today as they did when they started out. Young, however, has never phoned it in, even when he took seemingly inscrutable detours. And he’s shared some of his finest moments of ragged glory with Crazy Horse, who saddled up again for this double-album opus, delivered hot on the heels of Young’s other 2012 release, Americana. But whereas Americana found him putting the Crazy Horse stamp on age-old folk tunes, Psychedelic Pill is a heaping helping of new Neil in peak, uncompromising form. Even the 27-minute-plus “Driftin’ Back,” which finds a delicate, contemplative mode before drifting into electric meandering, isn’t aimless or boring. Its sonic patterns actually hypnotize before his lyrics (“gonna get me a hip-hop haircut”) jolt you back. There’s more noodling on “Ramada Inn,” but these guitar explorations are lullaby-like. “For the Love of Man,” almost a hymn, is even more soothing — and a great lead-in to the harmony-laden epic, “Walk Like A Giant,” full of chunka-chunka chords and the crunching, scraping sound of dinosaurs lumbering across a changing landscape. With the autobiographical tunes “Born in Ontario” and “Twisted Road” — the latter simultaneously describing Young’s love affair with music and the experience so many have had listening to his — we’re reminded once again why Young still walks like a giant in the pantheon of rock gods. — LYNNE MARGOLIS

Next post Ronnie Fauss: "I Am the Man You Know I'm Not"