Rosanne Cash: “The River & the Thread” 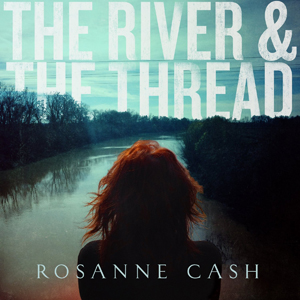 The guitar is all tremble and steam, just a few notes rocking back and forth over a lean rhythmic pocket. The voice that announces, “I’m goin’ down to Florence, gonna wear a pretty dress …” is as earthy and lush as the soil in the Mississippi Delta. With its easy meander, “A Feather’s Not a Bird” — the travelogue of a song that opens Rosanne Cash’s new album — offers a deconstructive chorus that culminates in a far larger truth: “A feather’s not a bird, the rain is not the sea, a stone is not a mountain … but a river runs through me.”

To wrestle with the ghosts of our past, especially the ones we don’t know by name, is to find grace in where we come from. On The River & the Thread, Cash, who was born in Memphis, raised in Southern California and fled Nashville (and a country career that yielded 11 No. 1s) in the mid-90s for New York City, looks back and finds a fertile sense of sacred ground. After 2006’s Black Cadillac, a song cycle of mourning following the death of her father, mother, and stepmother within 16 months, and 2009’s The List, culled from the 100 Essential Country Songs Johnny had given her as a teenager, returning to the roots of her people seems inevitable. What she finds, more than the obvious girl redeemed by the land of her birth, is a complex sense of a South that is long gone and right now.

The loping “Etta’s Tune” captures the romance of Johnny’s Tennessee Three bassist Marshall Grant and his widow, while the plucky, mandolin-marked “Sunken Lands” ploughs the sharecroppers reality with a dignity. The slinky “The Long Way Home” swaddles the attenuated verses in strings and slowly rising “oooohs,” capturing the humidity and laconic pace of summer. And the Marlboro rhythms of “World of Strange Design” present the suspicions of deep Southerners without judgment — and stitches them up with a hissing electric solo from Derek Trucks that burns. It’s a song of talking around what’s needing to be discussed. But it’s the faltering “Money Road” that is the most brazen and haunted; building the song around the ghost of Emmitt Till, the bridge in “Ode to Billie Joe,” and her own quest to understand, Cash waxes philosophical rather than preachy. The questions are more powerful than pronouncements, the pictures indelible, and the vocal decidedly sexy.

Equally invested is the notion of redemption. The quiet prayer of “Night School” lands softly, the electric piano shuffler “50,000 Watts” homages local (religious) radio stations, and the stark “Tell Heaven” suggests the only refuge is here. More than a mere survey course of regionalism, The River & the Thread looks at progress’ impact, as well as how desire builds bridges and tears down walls. Drawing on more genres than practical, the result is a smart, intoxicating album that satisfies musically, sonically, and as a cohesive song cycle. — HOLLY GLEASON