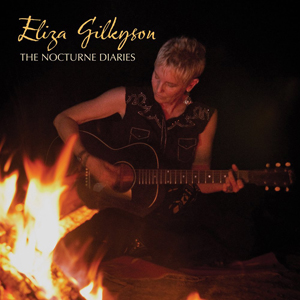 Ever since her by then already three-decade-plus-long music career hit its artistic stride in full with her watershed 2000 album Hard Times in Babylon, Eliza Gilkyson has distinguished herself as not only one of the best modern folk singer-songwriters in America, but also one of the most reliably prolific. Counting a pair of live albums and RetroSpecto, an essential anthology of her earlier years, The Nocturne Diaries is the Austin-based Gilkyson’s 10th release of the last 14 years — and it’s every bit as good as everything that came before it. Apart from the two exceptional covers (“Where No Monument Stands” and “Fast Freight,” the latter penned by her late father, ’50s folk artist Terry Gilkyson), all of the songs were born out of the kind of late-night musings that demand reckoning by the “Midnight Oil,” pen and guitar at hand. Not that they’re all the stuff of nightmares: there’s actually a strong current of hope running throughout the record, and blessings counted in spades in tender songs like “Touchstone,” “No Tomorrow,” and the sweet, dreamy closing lullaby, “All Right Here.” And in “Eliza Jane,” Gilkyson even pokes playful fun at herself for too-often turning a blind eye to blue horizons in favor of “doin’ that doomsday dance.” Rest (or more aptly, unrest) assured though, there’s plenty of real darkness here, too. In “Not My Home,” a youthful victim of sexual abuse trapped in a very literal living hell (“This house has secrets that no one should ever have to bear alone”) plots her escape, while the troubled teenaged protagonist of “American Boy” is a veritable ticking time bomb of dangerously over-medicated angst. And the fact that the song is so damn catchy you can’t help but sing along and tap your foot to it, even knowing what’s at stake in the lyric, really will keep you up at night. As it should. — RICHARD SKANSE