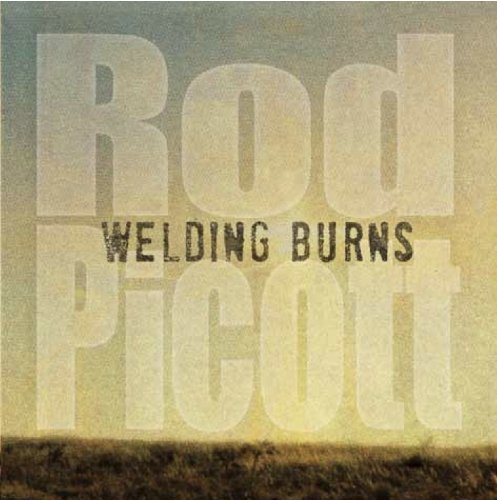 In the simple but highly effective video for his song “Little Scar,” Rod Picott — accompanied only by his acoustic guitar and the mournful cry of a pedal steel — serenades the memory of a lost love, portrayed in transparent, fleeting glimpses by his frequent musical partner, Amanda Shires. It’s over in well under three minutes, but like the ghost in the video, that haunting spell of lonesome lingers with you — just as it does with all 10 of the dusky, perfect beauties collected on Welding Burns. Picott lives in Nashville but hails from Maine, which explains both the blue-collar grit of songs like the title track and “Sheetrock Hanger” and his long association with fellow Maine native Slaid Cleaves, with whom Picott co-wrote three of the album’s tracks. (Picott, in turn, has had a hand in writing or co-writing a handful of the Austin-based Cleaves’ best-known songs, including “Broke Down.”) But it’s not really Picott’s rugged Northeastern roots or troubadour connections that make Welding Burns such a compelling listen; it’s the slow-burn ember of his raspy voice and the mature, broken-in emotional wisdom and resignation of his lyrics. Every observation here rings real and true, whether he’s reflecting on his own regrets and misgivings (“Hang my head down, drag the whole damn world around,” he laments on “Jealous Heart,” “I keep your picture in a box with this jealous heart of mine”), or sketching equally poignant portraits of down-and-out factory workers (“Rust Belt Field,” “410”). Sometimes, he inhabits the soul of those workers so completely that the line between narrator and subject is too blurred to distinguish one from the other. “I swore I wasn’t gonna stay here,” Picott sings in the weary voice of the title track’s second-generation shipyard worker, whose dresser drawer is filled with pocket T’s with “little holes burned in each one/Where the good shirts used to be.” “I used to dream a lot,” he sighs, “now I can’t remember what it was that I was dreaming of.” The scars Picott writes and sings about may vary in size, and not all of them are worn on the flesh, but they all ache like old war wounds. — RICHARD SKANSE

Next post BettySoo and Doug Cox: "Across the Borderline: Lie to Me"