BettySoo and Doug Cox: “Across the Borderline: Lie to Me” 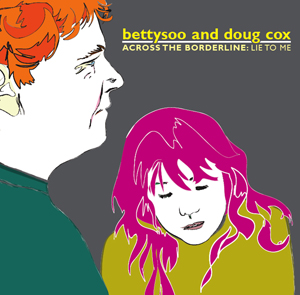 BETTYSOO AND DOUG COX
Across the Borderline: Lie to Me
www.acrosstheborderline.org

Spring, Texas, native BettySoo is one of the finest young folk singer-songwriters to emerge out of the Austin scene in the last decade. Her Gurf Morlix-produced third album, 2009’s Heat Sin Water Skin, was her breakout, but her 2007 sophomore set Little Tiny Secrets was an under-the-radar gem. Her original songs are top-notch, but it’s her singing that’s showcased on Lie to Me, BettySoo’s first collaboration with Vancouver Island dobro player Doug Cox under the duo name Across the Borderline. All 10 tracks here are covers, mostly by Texas writers (Butch Hancock, Guy Clark, Doug Sahm, Betty Elders, Blaze Foley, Jeff Talmadge and David Halley) but with Cox’s own homeland represented via songs by Loudon Wainwright III, Jane Sieberry and Bob Carpenter. Cox takes the lead vocal on Wainwright’s “Be Careful There’s a Baby in the House” and provides impeccable instrumental backing throughout, but it’s the across-the-board high quality of the material and BettySoo’s gorgeously expressive, crystal-clear voice that commands the most attention. Her take on “Dublin Blues” proves she could have certainly held her own amongst the Americana heavyweights represented on this fall’s forthcoming This One’s For Him: A Tribute to Guy Clark, and the lonesome, spooky reading she and Cox give Hancock’s “Boxcars” — though miles removed from the definitive, train-off-the-rails version laid down by the Joe Ely Band back in the ’70s — is disarmingly effective. Elders’ plaintive “Light in Your Window,” Carpenter’s “Every Other Road” and Talmadge’s “Lie to Me” are other highlights, but the rarest jewel here is “Louis Riel,” a lesser-known Doug Sahm song paying tribute to a Canadian folk hero of the same name. As it turns out, BettySoo isn’t the first talented Texas artist that Cox has known and worked with; Sahm wrote the song while living on Vancouver Island for a couple of years himself back in the ’80s. — RICHARD SKANSE