Rock the Goat: Resilience — “It’s Gotta Come from the Heart”

If there was a definitive explanation of just what resilience is, I’d be asleep by now. But there isn’t, and that’s why I’m still awake, curled over my laptop, fumbling with reading glasses that are both too weak and too strong to enable me to see well enough to type. As I slide my glasses forward and then back across the bridge of my nose to better adjust for the size of the text, I think I’ve reached the conclusion as to just why the definition of resilience has everyone from scientists to psychologists — and now, even me — scratching their head.

Perhaps nobody’s been able to pinpoint the crux of just what resilience is because we all receive and therefore handle life’s inevitable blows differently from one another. Maybe there’s an art to resilience that’s not open to clinical assessment or interpretation. Why? Because it’s just too personal. Regardless, magazine articles and television talk shows further compound the confusion by spinning their own take on whether resilience is an inborn genetic characteristic, or a learned behavior cultivated through personal experience. And in the end, most of what they conclude on both sides will seem unreasonable, judgmental, and sometimes — even insulting.

Though opinions vary, there is a distinctive characteristic of resilience that both science and psychology embrace. And that’s the “ability to remain buoyant when faced with stress and trauma.” Remain buoyant? Really? Just tell that to the soldier I saw walking into Brook Army Medical Center — the renowned military hospital, in San Antonio, Texas. I’d taken a break from the bedside of my mother to get some fresh air. As I was walking out, he was walking in. Though his wounds had long since healed, there was still no mistaking the fact that his face — and most of his body — had once been burned beyond recognition. I doubt there were many “buoyant“ moments during his rehabilitation. One need only glance at the patchwork of scars marring his skin to know that.

Equally as disheartening as the “buoyancy” theory, is the mathematical approach to resilience quantifying it as, “The maximum energy that can be absorbed per unit volume without creating a permanent distortion.” Math has never been my strong point, but I can comprehend the gist of that well enough to know that I don’t agree with this definition, either. No matter how much faith we might carry in our hearts, I think it’s unlikely for most of us to be pliable enough to return to our original form “after being bent, compressed, and stretched to the breaking point.” When you walk through the bowels of hell and make it out the other side, I doubt you’re unscathed from the journey.

I personally know this to be true every time I play music for patients recovering from and/or entering into treatment for breast cancer. I’ll never forget the woman I met whose cancer had come back — with a vengeance. To save her life, she’d had a double mastectomy. She’d also lost her son and grandchild in an automobile accident the very same year her husband passed. Upon hearing this, I asked her, “How can you possibly be standing?” She whispered, “I don’t know, I just am.” I knew, by the conversation that ensued, that she’d “been stretched to the breaking point,” shattered — and had never been the same since. Physically or mentally.

Resilience can’t be pigeonholed into a mathematical equation. That makes about as much sense as the Mayo Clinic’s championing of the whole “buoyancy” approach to adversity, actually using the term “roll with the punches” on their website. How are you supposed to just roll with the punches when you take a blow — like this woman — so hard it knocks you out of the ring?”

One of my dearest friends lost her husband last year. His death was so sudden, it left our heads spinning — as we had all just celebrated Halloween together the night prior. After hearing of her loss, there were no words I could say. There still aren’t. Back in 1996, I wouldn’t have started a mailing list to boost attendance at my performances without the help of his wife. And she wouldn’t have become the friend I came to love without him. They completed one another.

After the ambulance had long since pulled away, and the ensuing condolences, sympathy cards, and endless covered dishes slowed to a stop, my friend closed the door and faced this grief — and that empty leather chair where her husband used to sit — in solitude. She chose to sink into the deepest, most darkest part of the ocean: Alone.

Me leaving her be, and her, weathering those turbulent conditions solo, would no doubt be considered as daft by those that write about the resilient as being people who are able to “get over it,” “embrace their social network,” and have the innate ability to “move on.” But you can’t be a part of someone’s “social network” when they need space. Long ago, she made me a piece of art that reads, “It takes a long time to grow old friends.” Just like it says in the song “Old Friends,” which Guy Clark wrote with his wife Susanna and Richard Dobson, my friend knows that we “shine like diamonds.” And that “old Friends you can always call.” And when she does reach out to me? I’m there.

She was still very much on my mind when I performed at Guy Clark’s 70th birthday tribute at the Long Center in Austin. How I wished she’d have been able to make the show, because I wanted my friend to marvel — right along with me — at the tenacity Guy Clark continues to convey as both an artist and person. 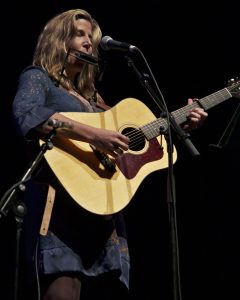 Performers from across the Americana and Texas music spectrum converged to celebrate Guy’s big day as well as the recording we’d all partaken in called This One’s for Him, where Guy’s songcraft was celebrated by us each singing our own interpretations of his songs. That night as I sang the “The Dark,” penned by Clark and Buddy Mondlock, I hoped my dear friend might once again notice that it’s “So dark you can see the moon.” I wished for her faith, hope, and a hint of silver light to see her way through her grief.

My friend is now evolving into someone new, someone I’m learning to get to know all over again. There’s the before. And there’s the after. Perhaps resilience is simply mastering the art of living. Whatever it is, I think the interim between the dark and daylight is pure hell. And that’s a pit you don’t just “bounce” out of — you have to climb. You stick your hands into the sides of the unknown and claw until your nail beds peel back. Then you claw some more.

As I consider both the strangers and loved ones that continue their fight through the dark, I think, too, of Guy Clark, who just lost his own bookend, Susanna. When it’s “so dark the wind gets lost,” time stands still and there’s just no telling how anyone ever musters the courage to venture from no-man’s land back into the land of the living. Perhaps there has to be an innate sense of purpose bigger than ourselves to even try. A person who knows that even though it might be “too dark for goblins,” it’s also “so dark you can see Ft. Worth from here” is inspiring — because they aren’t defined by their adversity.   They look out into “the dark,” and are still somehow able to see the lights.

Choosing to flip back on the lights in the aftermath of a traumatic event is not something everyone’s gonna be able to do. Maybe resilience is that choice to begin, again — but people all need a chance to heal in their own way and in their own time, and I don’t think it’s right to judge them while they’re in the midst of that process. Because if and when they are able to get back on their feet, it seems like the will to chisel out a new life has to come from within, from that place where we all feel our wounds the most: the Heart. As Susanna Clark put it so eloquently in another song she had a hand in co-writing — a song that embraces the resolve to sing and to dance, no matter what gets thrown at you in the process — “It’s gotta come from the heart, if you want it to work.”

Written in memory of Susanna Clark — Thanks for the music.