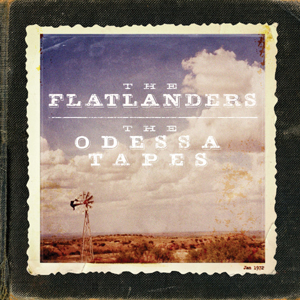 As if the Flatlanders’ story wasn’t already bizarre enough, The Odessa Tapes should earn Joe Ely, Butch Hancock and Jimmie Dale Gilmore a Guinness book spot for “band with the weirdest history.” Name another group that started recording and touring together 30 years after they never really formed or broke up, then discovered the tape from their barely remembered first recording session not only still existed, but after sitting in a Lubbock closet for more than three decades, was in perfect shape and sounded awesome.

These 14 tracks, including four that trio never re-recorded together, offer a crystal-clear window into the formative years of their remarkable friendship and musical bond. It’s worth noting that only Gilmore sang lead then; according to Hancock, he was being groomed as a Nashville country artist (the album eventually released as More A Legend Than A Band originally was credited to Jimmie Dale and the Flatlanders). And Ely wasn’t yet writing Flatlanders songs. Al Strehli’s “I Know You” and his sister Angela’s “The Heart You Left Behind” open and close the album. The cuts in-between include Gilmore’s now-iconic “Dallas,” with great harmonies (to which bassist/mandolinist Tony Pearson also contributed) and Hancock’s wonderful harmonica; Hancock’s “Shadow of the Moon,” which exemplifies the album’s living-room feel (it actually originated in the band’s shared home); and amusements such as Ed Vizard’s “Bhagavan Decreed.” That one is an indicator of both their spiritual explorations and the hippie-trippy times; Hancock’s titles also reflect his fascination with celestial bodies.

Though the production is not lush and pal Steve Wesson’s Theramin-like singing saw is overused, this overnight session was intended as a demo. The fact that it’s so listenable is a testament to the skills of some long-forgotten engineers, the luck of landing in a great studio (Tommy Allsup’s L.A.-quality recording facilty) and the nascent brilliance of three young men who, thankfully, have stuck together and reached even greater heights. — LYNNE MARGOLIS

Previous post Rock the Goat: Resilience — "It's Gotta Come from the Heart"