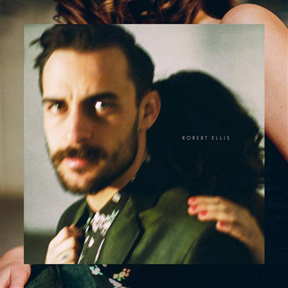 From the first sparkling moments of “Perfect Strangers,” it’s apparent that Robert Ellis has found a more pop-forward take on the Americana-leaning songwriter aesthetics of his critically acclaimed The Lights From The Chemical Plant. What takes a few more songs to realize, though, is that his self-titled follow-up is — even more profoundly — a deep dive into love’s dissolution, sexual freedom, and its inherent emptiness. Ahhh, the eternal conundrum of wanting the chimera and yet never quite being able to embrace the cracks.

Like Richard Ford’s 38-year old divorced protagonist Frank Bascombe in The Sportswriter, who “still believes in the possibilities of passion and perfection,” Ellis is willing to seek, but also can’t help but see the shortfalls, empty emotional pockets and romantic distrust fed by disappointment. His pain makes for a compelling song cycle in a world where modern love has never been more challenged, or rewarding.

And it’s not just his pain, either. The sweeping “California” takes the ebullient rush of wide-eyed romance and scrimping to make it work into the desolation of a woman packing up again, knowing all was for naught and the splinters of her broken heart is all the kindling left to spark a new life. Like Andrew Wyeth’s Helga, stretching across that vast field reaching for what we shall never know, the heroine knows her survival is up to her; love will be what she’s brave enough to make it.

Then there’s “Amanda Jane.” With whispery vocals — and a light tropical breeze imbued by brushes on high hat — Ellis’ lyrics evoke John Prine’s “old trees grow stronger every day” from “Hello in There” as he paints the picture of a woman who can’t be healed by love. Suggesting that in the wearing nature of life, it’s believing in what’s impossible that foments relationships that are based on projected ideals and creates the irreparably broken hearts even Jesus can’t save.

Complex stuff, considering love’s myriad facets; it’s more than merely a dire wasteland. For Ellis, whose own marriage ended in divorce, it is a tabula rasa, sorting through things noticed, learned, tripped over.

“The High Road” opens with a bit of minor-keyed Segovia-invoking guitar and churlish bowed string ominousity, as Ellis confesses, “The high road is closed for repairs/nobody cares about songs any more/My enemies are passing me by, and I don’t know that I/could keep up anyway … ” The frustration and recognition is palpable, as the state of Ellis’ truth is one of grave pain and white-knuckled dignity. The Bela Fleck-invoking jazz guitar sculpture “Elephant” almost shouts to the truths and treasons of notions run aground, failure’s jagged edges, feelings crashing into each other — and the tangled truth of desire’s many tentacles. It melts into the Belle Epoque string-driven “You’re Not the One,” in which a creamy vocal marvels at how tortured one can be by dreams of a woman who lingers in spite of being left.

That same woman may or may not be the same one who haunts the last track. As piano chords drop chop-chop-chop on “It’s Not Okay,” Ellis confesses he knows this forbidden love — who is not the one he’s promised to but must have all the same —consumes him. The song plays like Joe Jackson at his most terse or Ben Folds at a beat poet temple, with jazz progressions spiriting lines like “Maybe I’m destined to repeat myself forever/Don’t you think I’d learn from my mistakes/It’s not okay that I don’t even hide it/Just don’t care anymore.” The guitar notes flay at the frustration, build and burst into the sort of denied-passion release that made Hendrix pull listeners closer. The consummation of need, want, desire is its own climax, Ellis’ aural equivalent of whatever rogue romance dogged him in all his more pastoral and Hallmark moments realized. Like the abstract instrumental, “Screw,” what is said without words in the freeform, improvisational coda is as eloquent as the song’s so carefully constructed lines — right down to the hushed section that echoes the cloud of nothing and ether that follows the most satisfying coitus.

Love, like cogent lust, is never easy. Here, Ellis wrestles with the notion of monogamy, denial, (im)possibility — and refuses to relinquish the yearning for that certain mouth, those fingers carving tracks across his back. It is a bottomless well, and yet, the falling and the drowning is its own state of being. Adult. Serious. Real. This is not a record for children, those who believe in fairy tales, or those who wish to look the other way. Robert Ellis has stared into the sun of carnal reality, told the hard truth and emerged battered for the wear. — HOLLY GLEASON

Next post Band of Horses return with "Why Are You OK"