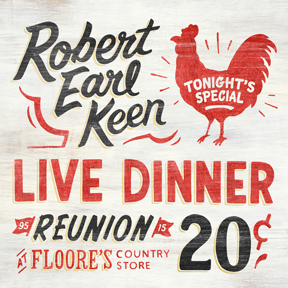 “20 years ago, a very monumental live record was made right here on this stage, and tonight, you get to celebrate the 20th anniversary of that. Are you digging it?”

That’s master of ceremonies Cody Canada of the Departed and Cross Canadian Ragweed fame, addressing the crowd at the recording of Robert Earl Keen’s Live Dinner Reunion back in September of 2015. The setting was the outdoor stage at John T. Floore’s Country Store in Helotes, Texas; the earlier record in question was Keen’s No. 2 Live Dinner; and the “monumental” superlative was, if anything, an understatement. Recorded in August 1995 and released to relatively little initial fanfare the following March, Keen’s second live album (and sixth over all) went on to become not only the best-selling album of his career, but a bona fide landmark of Lone Star music. Much like Jerry Jeff Walker’s ¡Viva Terlingua! did at the outset of the Austin-centered progressive country movement 24 years earlier, No. 2 Live Dinner essentially set the table for an entire cottage industry of maverick Texas troubadours and roots-rock bands with the wherewithal to foster a passionate statewide (and beyond) fanbase still unrivaled by any other regional scene in America — let alone in “Americana.” Soon after the album’s release, a veritable host of younger upstarts like Jack Ingram, Pat Green, and yes, Oklahoma’s Cross Canadian Ragweed were all nipping at his heels and vying for a seat at that table, but Keen was king. He was both the OG of the “new” Texas music scene and a natural bridge to its storied ’70s roots, with such notable forerunners as Joe Ely and even Willie Nelson recognizing him as not just a peer, but as a legit fount of cover-worthy instant classics. And whenever people still outside of the loop happen to ask who the hell Robert Earl Keen is and why he’s such a big deal, No. 2 Live Dinner — the perfect combo plate of Southern charm, raconteur wit, and literate eloquence served over a  mixed bed of rollicking folk, country and rock — has long been the definitive go-to answer.

That’s a hell of a legacy for a sequel to live up to. But to Keen’s credit, title aside, Live Dinner Reunion doesn’t really sound like a night spent living in the past. Out of the new double album’s 17 songs, only four — “Gringo Honeymoon,” “Merry Christmas from the Family,” “The Road Goes On Forever” and Terry Allen’s “Amarillo Highway” — were also featured on its 1996 predecessor, and they’re only here because they’ve all as indispensable to any full-on Robert Earl Keen concert experience as his droll stage banter and crack band of 20-plus years (lead guitarist Rich Brotherton and bassist Bill Whitbeck both go all the way back to before No. 2 Live Dinner, while pedal steel player Marty Muse and drummer Tom Van Schaik joined the family not long after.) That leaves ample room for a respectable selection of songs from 10 (but not all) of Keen’s albums spanning his career from his 1984 debut, No Kinda Dancer, all the way up to 2015’s Happy Prisoner: The Bluegrass Sessions. And though there are plenty of other fan favorite staples here, like 1993’s “Corpus Christi Bay” and 1998’s “Feelin’ Good Again,” it’s hardly a predictable greatest-hits-only kinda set list. Along with three picks from that all-covers bluegrass album (which accounts for the presence of additional band members Kym Warner of the Greencards on mandolin and Brian Beken of MilkDrive on fiddle), surprises here include the exquisite title track to No Kinda Dancer and a spry crack at “Ding Dong Daddy from Dumas” (made famous by Louis Armstrong, but written by Texan Phil Baxter). The latter even features cameos by former REK Band members Brian Duckworth (fiddle) and Mark Patterson (drums).

“No Kinda Dancer” boasts a notable cameo of its own in fellow Texas singer-songwriter Bruce Robison, who sings the first half of the song before Keen cuts in to bring it home with the last verse and chorus. “I’ll Go On Downtown,” a rarity last heard on Keen’s first live album — simply called The Live Album, from 1988 — gets the duet treatment, too, albeit with Keen and Cory Morrow, one of those aforementioned young Texas upstarts who came up in the immediate wake of No. 2 Live Dinner. In the second half of the show, Cody Braun of Reckless Kelly brings his fiddle to “Wild Wind” — still arguably Keen’s best song of the last 15 years — and Cody Canada accentuates an 8-minute “Lonely Feelin’” with an impassioned but tasteful guitar solo. But it’s Lyle Lovett (Keen’s old Texas A&M buddy) and Lubbock rocker Joe Ely who turn in the set’s most memorable guest turns. Before sharing a romp through Jimmy Rodgers’ “T for Texas,” reprising their duet from Happy Prisoner, Keen and Lovett trade lines on “This Old Porch,” the song they wrote together and subsequently recorded on each of their respective debut albums. Keen’s original take of the tune — which he called “The Front Porch Song” — was the friskier of the two, but he respectfully defers here to Lovett’s more meditative, achingly wistful version. Much later, at the very end of the album, he does one even better by Ely, letting him sing the lead on the storming “The Road Goes on Forever” from start to finish. It’s a helluva selfless gesture, letting someone else not only sing his biggest hit but effectively close his own show. But then again, Ely’s recording of that song (along with another Keen keeper, “Whenever Kindness Fails”) on his 1992 album Love and Danger and subsequent performing of it at nearly every one of his own shows since played a pretty big role in positioning Keen for his own breakthrough. Suffice it to say that when Ely enthuses, “Robert Earl Keen, thank you writing that song!”, the gratitude goes both ways.

All of that sounds well and good, you might say, but how does Live Dinner Reunion compare to its “monumental” forebear? The bottom line is, all their shared variables (including Lloyd Maines, who sits this one out as a pedal steel player but reprises his producing role) aside, the two really couldn’t be more different. No. 2 Live Dinner was the perfect snapshot of the Robert Earl Keen Band hitting its stride in full for the very first time, an early career-making moment that inadvertently but undeniably marked the birth of a new Texas music zeitgeist. Live Dinner Reunion, by contrast, sounds exactly like what it was: A “very special,” one-off event starring the same band and frontman, now long-established as among the very best in the land, with a heavy allotment of very special guests all paying thanks and tribute on the same stage for the sake of celebrating an anniversary and to take an everyone-in-the-same-frame family portrait suitable for framing. Rising to the occasion, everyone brings their A game, a great time seems to have been had by all, and the end result certainly deserves space on the shelf, hard drive, or (sigh) streaming playlist of any true Keen fan — most of whom are almost guaranteed to yes, dig it. But when it comes to picking the one live record that captures the true essence of Robert Earl Keen at Co. at their absolute best, there’s still just no beating old No. 2. — RICHARD SKANSE