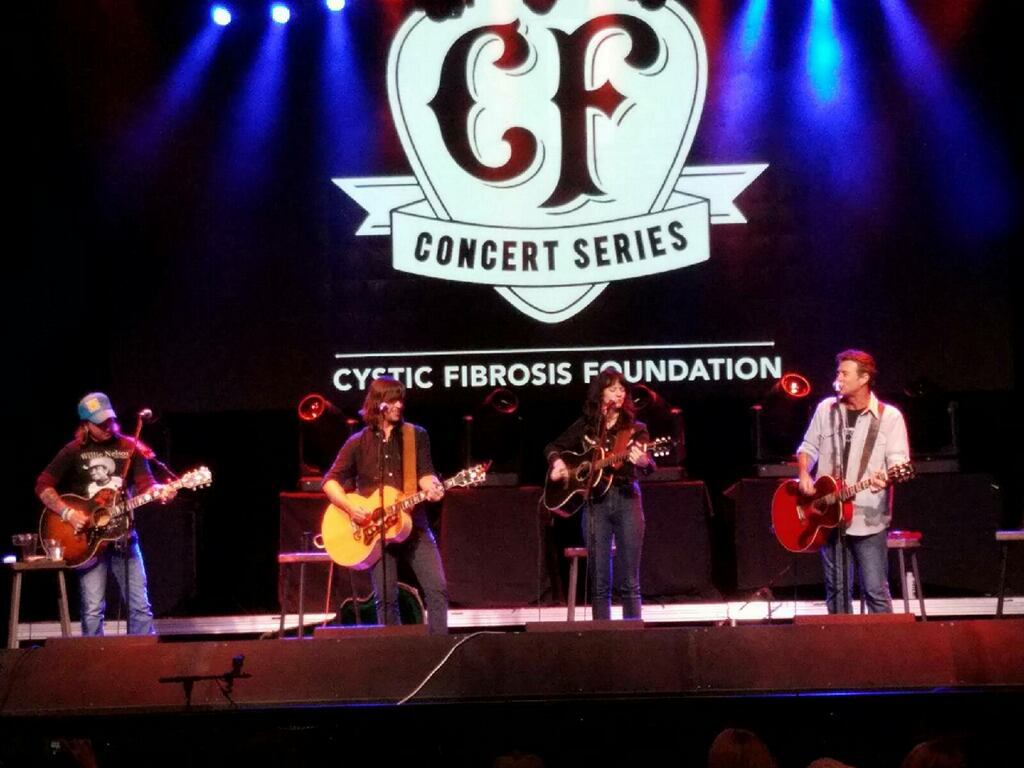 Few Lone Star artists of note don’t have an annual cause to promote with a start-studded show where all-day line-ups, golf tournaments and social awareness give such events an over-the-top goodtime feel.

For a decade now, Rhett Miller, the lead singer for alt-country pioneers Old 97’s, has held an annual benefit concert in Dallas for the CF Foundation, an organization dedicated to finding a cure for Cystic Fibrosis. But in a first for the long-running series, this year’s edition — held Saturday night at North Dallas’ Gas Monkey Live — Miller didn’t headline the event by his lonesome. Following a dependably jaunty, jovial opening set from local folk-rock duo the O’s — who have toured with the 97’s and played almost every CF Benefit to date — Miller was joined by local radio personality Gordon Keith for a jangly cover of the Smiths’ classic “How Soon is Now.” Then came the main event: a four-artist song swap featuring Miller, Red Dirt favorite Cody Canada of the Departed, Nashville-based alt-country favorite Nikki Lane, and Arizona roots rocker Roger Clyne, of “and the Peacemakers” fame.

Texans music fans love song swaps. This is a scene where original songwriting is revered, and a good song swap can be the perfect format to hear songwriters not only showcase their work in an intimate, casual setting, but also share the stories behind those songs. What made this song swap different from most, though, was the fact that the foursome gathered on the pristine, spacious Gas Monkey Live stage weren’t lifelong buddies who already knew each other’s songs and stories inside out. As Canada noted from the stage, although he and Miller have traversed much of the same ground for over two decades, they somehow hadn’t ever crossed paths or played any shows together before. And although Miller and Lane have toured together, as have Canada and Clyne, the fact that they were all effectively getting to know each other through songs and road stories in real time in front of an audience gave the entire affair a unique and delightfully intriguing dynamic. The songwriters’ somewhat unfamiliarity with each other didn’t get in the way of a relaxed vibe, though, thanks the always charismatic Miller’s chatty ringleader style and the way the others weren’t afraid to gently poke fun at him — in the manner of old friends — at times for his own apparent newness to the song-circle format.

One of many warm and fuzzy moments came early on, when Miller brought out his niece to perform Bob Dylan’s rootsy classic “You Ain’t Going Nowhere” with Lane as the whole group sang along. The willingness of each artist to jump in on harmonies and to add guitar support during the others’ songs was a genuine reflection on how special the night seemed to be for all involved. Canada in particular showed his hard-earned song-swap chops with expert turns as lead guitar for most of the songs through the night. After the first couple of rounds, the artists would call out which key the song would be in before they started to play so the others could be ready to jump in as inspiration struck. 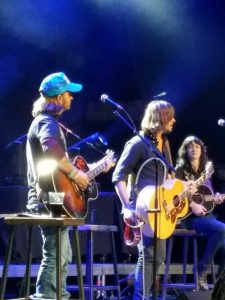 With each round, Miller suggested everyone perform a certain type of song. At first, Canada, Lane, and Clyne played along dutifully. To kick-off the segment in which he asked each person to sing an “inappropriate song,” Miller offered up the the brazen “Let’s Get Drunk and Get it On,” from the Old 97’s most recent album, 2014’s Most Messed Up. Lane followed suit with her spunky “Sleep With a Stranger,” and Clyne sang “Contraband,” his 2007 drug-dealing tune. When Canada’s turn came around, he whispered something Miller — presumably asking how inappropriate he could go. Apparently given the green light, he introduced the highly profane “Leaving Tennessee” by saying the song was written after an argument with his wife of 19 years and is not necessarily about a certain mainstream country star that most people understandably think it is. He then proceeded to sing the song packed with 17 F-bombs, with the Miller, Lane, and Clyne all gleefully adding harmonies during the jubilantly foul-mouthed choruses.

After Miller was gently goaded by Canada and Lane into indulging a fan’s request to sing the 22-year old “Wish You the Worst,” Clyne brought the house down with his epic “Green and Dumb,” a slow burner where Clyne’s voice dramatically swelled to raucous approval. The emotions continued to pulse when Canada sang an especially wrenching rendition of “‘Til I’m Too Old to Die Young,” which fellow Oklahoma songwriter Kevin Welch wrote at the birth of his daughter Savannah, the beloved Trishas singer who very recently lost her right leg after being hit by a car in Wimberley. Miller’s awed reaction at its finish — “Ok, wow!” — pretty much captured the feeling of everyone in the venue.

As the evening rolled towards the end, Miller offered up “Misanthrope,” a fine new song that’s likely to be on the Old 97’s 2017 record. And Lane, who earlier had joked with Miller about being “too stoned” to follow his rules for which songs to sing, brought out a bottle of Roger Clyne’s own branded tequila and poured a shot for everyone onstage. From first round to last, this a night all about cohesion and harmony — and a welcome one, at that. At a time when so much attention is paid to the things that divide us, having four artists of this caliber sharing their art to help highlight a worthy cause that everyone, regardless of political leanings, can surely agree is worth supporting is a pretty magical thing.

Next post Terry Allen: "The Juarez Device" and "There Oughta Be a Law Against Sunny Southern California"