Rob Baird: “Wrong Side of the River” 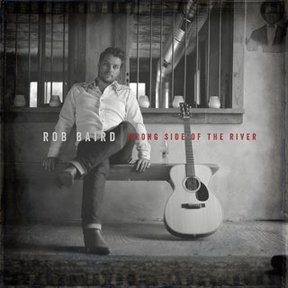 As tired and outdated as the sentiment “Nashville sucks” may be these days, when many a Lone Star artist has managed to make the most out of doing business with the suits on Music Row without abandoning their renegade principals or Texas audience, the fact remains that the town itself will never feel like home for every wandering country songwriter. Just ask Rob Baird, who moved from Austin to Nashville a couple of years back, gave it a good go for a while but ultimately decided Texas just fit his muse better. So he moved back, not bitter and broken but richer for the journey. His ambitious new record, Wrong Side of the River, is filled with songs that encourage forward movement while taking a couple of small but meaningfully scenic detours.

As has been the case for Baird’s excellent past albums, 2010’s Blue Eyed Angels and 2012’s I Swear It’s the Truth, the writing establishes a forceful, sometimes aggressive presence quickly and believably. Plain-spoken love songs and sepia-tinted river tubing ditties have plenty of room to roam on other artist’s notepads, but Baird and co-writers including Mando Saenz, Ben Danaher and the album’s producer, Brian Phillips, set sight on greater complexities and oft answerless questions. In “Run of Good Luck,” a tender piano leads into lush organ and gorgeous his-and-hers harmonies draped around a tale of a couple — described by Baird as “worn-out steel and leather” — wondering where it all went wrong. There’s hope for them still, perhaps, but it’s heavily tempered by a rock-bottom sense of defeat which is sadly far more relatable for most than the free-spirited road anthems we’re more used to. Baird’s rustic poetic style is more Boss than Townes, which lends itself well to the more assertive rockers such as “Oklahoma,” the bluesy “Pocket Change,” and especially the menacing, bleak country-noir title track. Meanwhile, slower tracks such as “Horses,” while softer, are profound in their overall magnitude. The expert mix of galloping beats, soaring pedal steel, robust organ and the album’s greatest instrument, Baird’s commanding presence, all make Wrong Side of the River the best kind of road-trip album, especially for when that dotted white line goes for days. — KELLY DEARMORE