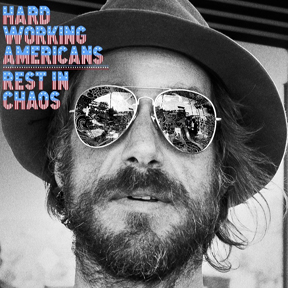 But with the new Rest In Chaos, HWA ups the ante significantly. Here the band — now supplemented by Okie lap steel player/guitarist Jesse Aycock — works out on a loose concept album about the tides of life, contemporary mores and pop culture from Snider’s pen, while working through a variety of sonic templates. From the building “Opening Statement,” which rides momentum like a press conference gone bad, to the sweeping “Throwing Goats,” with its chorus of “Shake, shake, shake,” this is a rhythmic-driven odyssey that keeps the melodies bounding with genuine propulsion.

In part a metaphoric look at how Elvis derailed (the surging blues “Burn Out Shoes”), Snider’s marriage imploded (“It Runs Together”), pernicious gossip (“Massacre”) and yes, Charles Manson aka “Kathleen Maddox’s only son” (“Acid”), this is some of the strongest poetry yet from the kid championed early on by both John Prine and Jimmy Buffett. Yes, his signature smart-assery is intact, but underneath there is a pathos that suggests larger issues are as easy to skewer as basic stubbed-toe foibles.

Whether the fragile, demi-busted tale of moderate sanity and stark settings “Roman Candles” or the utterly jammy “Purple Mountain Jamboree,” there is economy to the arrangements — and a real purpose to each instrument. “Something Else,” drums thumping clean and the guitars tumbling and tangling into a dissonant pile-up, suggests Tom Petty emerging from his early days into a full-frontal guitar stomper tacked onto an impalement of what we value, how we oversaturate until the opportunities and economy dry up. That Petty rush is also present on “Half Ass Moses.” Rhythm section locked and loaded, beats falling like whip lashes, the guitars get to boil and gush with gusto. Snider — vocal working against the flood — offers a core sample of a night lost, wisdom dropped and enough catch phrases to fill a t-shirt stand. “Show the world after you etch them in stone,” says the half-assed Moses; later he offers, “You can’t learn something that you already know.”

There’s a sweet strolling beat to the Muscle Shoals-feeling “Ascending Into Madness,” the quitter’s philosophical take on getting clean. But “Rest in Chaos,” the street shuffle with an angelic chorus that provides the album’s title, serves as a song of self-acceptance and understanding the realms from which we dwell. Quieter is Guy Clark’s “High Price of Inspiration,” featuring Clark himself. Haunted, it’s a husk of what the drugs that don’t kill you leave behind and also a contemplative take on the sacraments of jumpstarting creativity that builds and seizes, peaks and then washes away. That buzz-and-consequence notion permeates these tracks like a slow afternoon on Ray Benson’s bus. The steamy soul undertow of “Dope Is Dope” rides on waves of Fender Rhodes keyboards, a bit of fuzzy feedback and wah-wah guitar with the human touch of handclaps for punctuation. Beyond the space guitar solo, the chorus of “Dope is dope/and you’re high/up on it …” could become the catch jargon of the summer.

Snider’s grizzled vocals, at times wrung-out-rag witness, at others, side-of-mouth tossed-off snark, suit the material. Understated even when he’s leaning hard into the song, his frontman chops have given the folkie songwriter calibration and nuance. No matter the emotional tenor of what he’s delivering, there is a balance of bringing the song’s intention home and finding the nuance to the complicated songs he’s written. Schools’ musical instincts are on display here, too. Orchestrating a band of players to maximize each’s strengths, HWA deliver an album where the playing isn’t just for the jam, but to elevate the songs. A smart intellectual drift on a slow afternoon, a good companion on a lonesome night, this is the sort of rock ’n’ roll that matters long after the boogie fades. — HOLLY GLEASON

Previous post Rob Baird: "Wrong Side of the River"