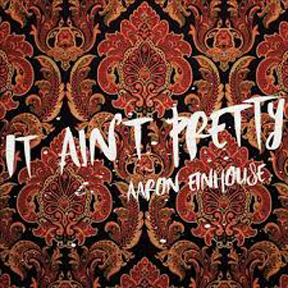 Aaron Einhouse knows that a country songwriter without a pile of tunes mining the depths of painful heartbreak and lessons learned the hard way is more of a jingle singer than a kerosene-breathed truth teller. But now four albums into his career, he’s also experienced and savvy enough to know that life’s ugly truths can be examined and reckoned with in a way that can actually be rather fun — sorta like stomping and sloshing around in the mud. With the capable assistance of producer Erik Herbst, the Austin troubadour continues to sharpen his roadhouse-ready sound on It Ain’t Pretty. With earthy, dusty vocals reminiscent of Reckless Kelly’s Willy Braun, Einhouse sounds like a man that can heartily throw down as his eyes well up. When he sings in the title track, co-written by none other than Hal Ketchum, “life aint pretty but it’s real,” he’s convincingly direct. The simplicity of the sentiment cuts a real path and hits hard — but it’s important to note that the song is also danceable as hell. And with a runaway harmonica blaring and heavy beats blasting, the album’s opening track, “Dancin’” is a screw-it-all remedy to life’s concerns. Sometimes, a no-rules night in the Stockyards of Fort Worth is what we need to move on to the next obstacle, imminent hangover be damned. There’s a good dose of Southern soul to be felt here as well. The slide guitar in “My Susannah,” and the inescapable groove in the anthemic, Muscle Shoals-tinged “Thinking of You” offer a side of Einhouse that isn’t quite ready to kick out the footlights or tear the swinging doors of their hinges; there’s a gorgeous sheen to both tunes that suggests that the highs of a party only feel good when you’ve crawled through the lows of loss. It’s not all tears and self-inflicted lessons, though; the Southern-fried “Fall of Eli Wilde” offers just the right amount of levity. It’s a song that would have fit perfectly in a 1970’s Burt Reynolds flick — and it feels right at home on this record, too. — KELLY DEARMORE

Next post Rob Baird: "Wrong Side of the River"