LSM Throwback Thursday Review Reckless Kelly: "Under the Table and Above the Sun" (2003) 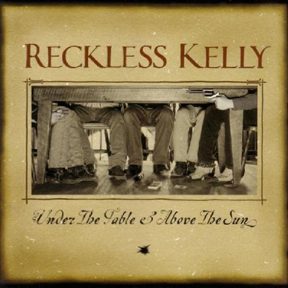 Even though they originally hail from the Pacific Northwest, Reckless Kelly is about as central to the last couple of decades of Texas music — at least the independent country-rock strain of it that this site chronicles and celebrates — than anyone this side of Robert Earl Keen. It’s a little hard to imagine how all of this would’ve evolved without Willy and Cody Braun and their figurative brothers in the band drifting down from Idaho to Austin, steeped in a uniquely rodeo-friendly branch of alternative country music from backing up their dad Muzzie Braun and soaking up the influence of family friend Pinto Bennett almost literally from birth. When they brought their own sound to Texas, it had already evolved into punchy, jangly rock ’n’ roll without losing that honest twang: their enduring gravitational pull has influenced and/or paved the way for the likes of Cross Canadian Ragweed, the Randy Rogers Band, Wade Bowen, Micky & The Motorcars (of course) and pretty much any other band or singer who’s in need of a blueprint for how to blend the twang and the bang into something sublime. They’ve even, in various ways, managed to contribute to the legacies of forefathers like Muzzie, Bennett, Keen, Steve Earle, Alejandro Escovedo, Joe Ely and others through covers and collaborations that blur genres and bridge generations.

It’s little wonder that Reckless has no problem lining up fellow artists to follow them back to their ancestral Idaho home for one unique annual festival, or convincing them to drop the guitars and pick up bats (then eventually pick the guitars back up again) for their much-anticipated annual Reckless Kelly Celebrity Softball Jams in Round Rock. Talent attracts talent, longevity and hard work breed respect, plus it’s hard to have a bad time at a Reckless Kelly show. It’s also hard to find a bad song on Under the Table & Above the Sun, one of the finest records not only in the RK catalog but in the whole loosely affiliated genre they’ve helped define.

Their 1998 debut Millican was already pretty unassailable, a fun and tuneful burst of twang-rock that revealed a band already pretty much fully formed. They didn’t necessarily share the alt-country angst of Uncle Tupelo or the doomed romanticism of the Old 97s, but they still packed an edgy buzz that served as a nice (if unintentional) counterpoint to the more countrified sounds that peers like Pat Green and Cory Morrow were cooking up around the same time. They were already messing with their formula by the 2000 follow-ups Acoustic: Live at Stubb’s and The Day: the former was a shaggy romp through mostly covers, and the latter was a studio effort that leaned harder into their guitar-rock instincts. Both were worth a listen, neither was quite as solid as their debut, but they did keep the momentum rolling for their damn near perfect 2003 effort, Under the Table and Above the Sun.

Early on Millican, lead singer Willy Braun tossed out a line about “I wish I was Bob Dylan/so I could write a bunch of hit songs,” and by Under the Table he sounded like a man doing his damnedest to make good on it. Sure, the taut three-minute album kicker-offers “Let’s Just Fall” and “Nobody’s Girl” didn’t aspire to the epic songwriting throne (although they’re catchy and compelling on their own terms), but on centerpieces like “Desolation Angels” and “Vancouver” there was a strong whiff of Dylan and his fellow lyrical titans. Willy and the band turned a personal journey and an off-and-on relationship, respectively, into the foundations of sprawling, melodic, urgently sung poetry with a grandiosity that they’d hadn’t quite reached in their still-young careers. Steadily boomeranging back to the line “keep the rubber on the road, and the blood inside,” “Desolation Angels” was a little cryptic and more than a little relatable, driven by acoustic guitar and close harmonies. “Vancouver” spelled things out a bit more, tumbling narratively through everywhere from Little Rock to Amsterdam and emotionally through regret, blame, and resignation to a too-well-traveled love. “I wonder now baby if you ever really saw the best of us/And I wonder what you’re doing and I wonder where you are,” Braun pines, with drummer Jay Nazz employing some deceptively tricky dynamics to frame the ups and downs.

It didn’t always cut quite so deep; sometimes they’d downshift to pleasant earnestness, with the likes of “Snowfall” and the album-closing “May Peace Find You Tonight” matching the easygoing warmth of a Walt Wilkins or Don Williams. For something a little more radio-friendly — at least in a world where the popularity of Reckless and their compatriots had become so pervasive that an expanding handful of FM radio stations actually were playing this independent stuff — the restless kick of “I Saw It Coming” or “Set Me Free” matched up then-newcomer David Abeyta’s agile guitar work with engaging beats, insistent melodies and memorable turns of phrase. With no shortage of straightforward pleasures on the album, the band was also free to mess around a bit with the Beatlesque homage of “Mersey Beat” or the oddly ominous hippie vibe of “Willamina.”

Under the Table and Above the Sun wasn’t the last killer Reckless Kelly record, and most admirers (this writer included) would argue it wasn’t even their first. But it did set a mighty high bar, and at a time when the “Texas music” universe was seriously expanding, it did its part to make sure that its creators would never be lost in the shuffle of something they helped build. Thirteen years later, they remain among the leading lights; a hundred years later, this album may be among the scene’s most celebrated artifacts. — MIKE ETHAN MESSICK