Parenthood, as any parent will tell you (and many single folks are sick of hearing), is full of challenges. As a father, I’ve been extraordinarily lucky; a wife who is a dynamite mother, a neighborhood school that we love, and a flexible, understanding employer have all helped make the rigors of parenthood a lot more doable. But thinking about my own situation got me wondering about all the folks you read about in this magazine who also happen to have kids — how do they do it? Long stretches of time away from home, hours that are basically opposite of those the kids keep, and the ever-present array of temptations … without a lot of dedication, it’s a life that can quickly derail a family situation. Mulling this, I asked a handful of these “road daddies” to share their thoughts on  how they juggle the difficult coupling of family life and a life on the road.

“Well, it definitely is a work in progress, and I feel like it’s interesting to be making it up out of whole cloth. What Kelly (Willis) and I do for a living is very different than anybody that we grew up with, but there are some things that I carry forward. My father always had time for me, and that made an enormous impact on me, and it wasn’t easy because he worked regular hours and everything. We keep such strange hours, and there are good things about it, that we’re not gone 9-to-5, but then we are gone odd hours otherwise.

So, it really feels like we’re kind of making it up, and with us it’s really changing. Our youngest is 5, and so now we’re moving out of ‘survival mode’ and into where we’re looking at working more. It was different two years ago, when it was just full-on babies and diapers and everything. Really, frankly, I think more about my own life these days — about getting back to work. The kids have all moved into that elementary kid thing, and there’ll be another phase coming pretty quick (middle school). From what I hear, they just continue to need you less and less for certain things, and you’re trying to have an impact more and more, when it’s not as easy to do. What we did for nine years was take care of infants, and now it feels like a whole other thing. It really is insane — they’re changing so much, so fast. You have to do things with your career, but we really need to focus on this, because it’s going to be over before we know it.” 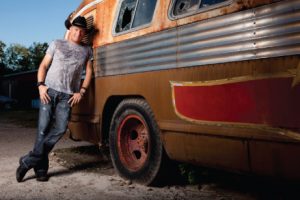 “As far as what Daddy does for a living — my girls, they couldn’t care less, you know? Hell, they won’t even come to one of my shows unless there’s cotton candy and rides there. They’re not at all impressed by the whole ordeal, which is pretty funny to me. The hardest part about being gone all the time is you miss the school programs, you miss the Christmas programs, the choir concerts … all those fun things that as a parent, the special moments you want to share. You miss a lot of that, and it’s a huge tradeoff that’s not always fair to the kids. They pay for your success, too, and they’re just innocent victims of your career. It’s not really fair, but it’s just the way it turns out. My older daughter, when I take her to school, she’s like, ‘Get outta here, go, shoo!’ because she doesn’t want anybody to know who her daddy is or what he does. You know, at that age, you don’t want to give the other kids any reason to mess with you. When her buddies say, ‘Hey, your dad is Kevin Fowler,’ she says, ‘Well so what? He still stinks.’ It’s wild. It makes for a weird childhood, I’m sure.”

“The good thing about my wife being our manager, and a mother, is she really knows what it’s like being away from the kids. Back around 2000, Randy Ragsdale had his son, and we were working a lot, as we always have. He would ask for time off, and she was never upset about it, but she just didn’t understand. We needed to stay out there and keep working. And then, we had Dierks, our oldest. And I remember the conversation between her and Randy’s wife Ashley, where she said, ‘Man, I’m so sorry I’ve been working everyone as hard as I have. I didn’t realize what it was like to have a kid and be gone for weeks at a time.’ So, over the last few years, we’ll do three weeks at the max and come home for a week. When you go out for a couple of weeks, you can just take the mindset of, well, I’m gonna be away from home for awhile. Once you get to about the third day out away from home, it gets a little easier, though you never really get used to it. If you go out for a weekend, come home for a week, and then go out again for another three days — rock ’n’ roll’s a lot of fun, but those three days can be excruciating. It’s almost better to stay out. The kids get used to you being there, and then you’re gone all of a sudden — it gets tougher for everybody. You know, my kids are very aware of what I do, and that I have to go out there. What I’ve been telling Dierks lately is, we just got back from Disneyland, and I’ve gotta go work for another year, so we can go back to Disneyland. You put it in their terms and they get it.”

“I’ve just got the one 7-year-old boy. I figured when he was young, I don’t think I minded being on the road as much, because it would seem like I would come home and he was still the same non-talking blob that I had left at home the month before; I loved him and I missed him, but there are limitations on what a baby can do. As he gets older now, it’s tougher:  you miss half a baseball season, some key moments. And so, it’s a challenge as he grows up and I realize, I can equate it into my life and what I was doing at his age, and know that this is an important time. I’m sure this is common knowledge to most parents. I don’t know what the trick is, you know, because this is how I make my living. We try and Skype every night before he goes to bed when I’m out for four or five weeks you know, just see each other’s face every day, that’s helpful. It sure helps to have a good spouse at home, somebody good taking care of him, making sure he doesn’t forget about you. I don’t know, I don’t guess I have any advice for anybody else who does this.

Just love your kids and make the time you have with them count, because it goes by fast.”

“I feel like the only real drawback to doing what we do is being away from your family. That’s not ever fun, but it’s the only way my family knows, including my wife, as we met after we were in this lifestyle. I think for the kids that makes it easier, because you don’t really miss what you never had, so they’re used to me coming and going quite often. The good side of it is, when we’re home, we’re there 100-percent, since we don’t have a 9-to-5 job to keep up with. Adjusting to home hours from road hours isn’t that hard for me; there’s a lot of motivation when you hear that baby cry to jump up. I don’t have much temptation to roll over and go back to sleep after I’ve been gone a couple of weeks. I’m usually the first one up. But, really it all revolves around strong mothers. I think that’s really the story; they’re the ones really keeping it together, so I’m pretty thankful for that.”

“It’s something that’s new for me, because my child is only 7 months old, but I’ve had my bandmates to learn from. Jeffrey and Les both have two kids apiece, and I’ve watched their kids grow up around the bus and the shows and the scene and everything. Part of me is very thankful that I get to have this job for a living, because my kids will get to see the world, you know? They’ll get to experience things and places that I never dreamed of getting to do when I was a kid. I’m looking forward to baby girl getting old enough so I can share stuff on the road with her. The downside is the obvious, where you miss out on little moments where she learns something new or figures something out, and that’s starting to happen more often as she gets older. So, it’s definitely getting harder. I honestly don’t know what I’m gonna do when she cries when I tell her I have to leave and she understands that I’m gonna be gone for three or four weeks. I guess I’m gonna have to cross that bridge when I get there, but for now it’s all good.”

So there you go. Working in music can be a hard thing to square with raising babies, but I can tell you that I’m the happiest I’ve ever been being a daddy. It’s got its hard moments, but there’s nothing sweeter than the love of a child. I live for it. And, pretty soon they’ll be big enough to do yard work! Then we’ll really go to town.