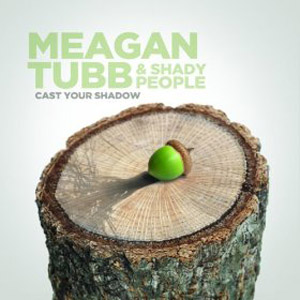 Clearly, Meagan Tubb isn’t lacking in the chops, pipes or math departments, as she demonstrates on her new release, Cast Your Shadow. Tubb not only plays guitar like Susan Tedeschi and sings like a, well, ballsier Sheryl Crow, she also manages to inject words like “rhombus” in her songs without coming across as a Southern Schoolhouse Rocker.
Tubb and her band, the Shady People (Jason Nunnenkamp, guitar; Wilson Carr, bass; John Duran, drums) are a tight, cohesive unit that brings to life these songs that we’re told were written from the perspective of inanimate objects and “creatures apart from herself.” Well, okay, that’s cool and all, but it’s on songs like “Heartbreak #8,” a straight-up, woman-scorned scorcher, and “Damn Good Man,” a funky call for a more suitable suitor (with responses from those shady people she hangs with), where Tubbs struts her best stuff. Then there’s “First Day of School,” which features the aforementioned rhombus and finds Tubb reminiscing about girl-with-guitar things like Wonder Woman lunchboxes and educating her teachers on the correct spelling of her name.
Today, it’s Tubb’s guitar slinging prowess — more than her songwriting — that is helping her make a name for herself. The album’s song credits clue the listener in on who’s playing which spicy lead (e.g. “lower harmony on guitar solo, Meagan Tubb; upper harmony on guitar solo, Jason Nunnenkamp”) to drive home that point that this woman can trade licks with the best of them.— GLEASON BOOTH