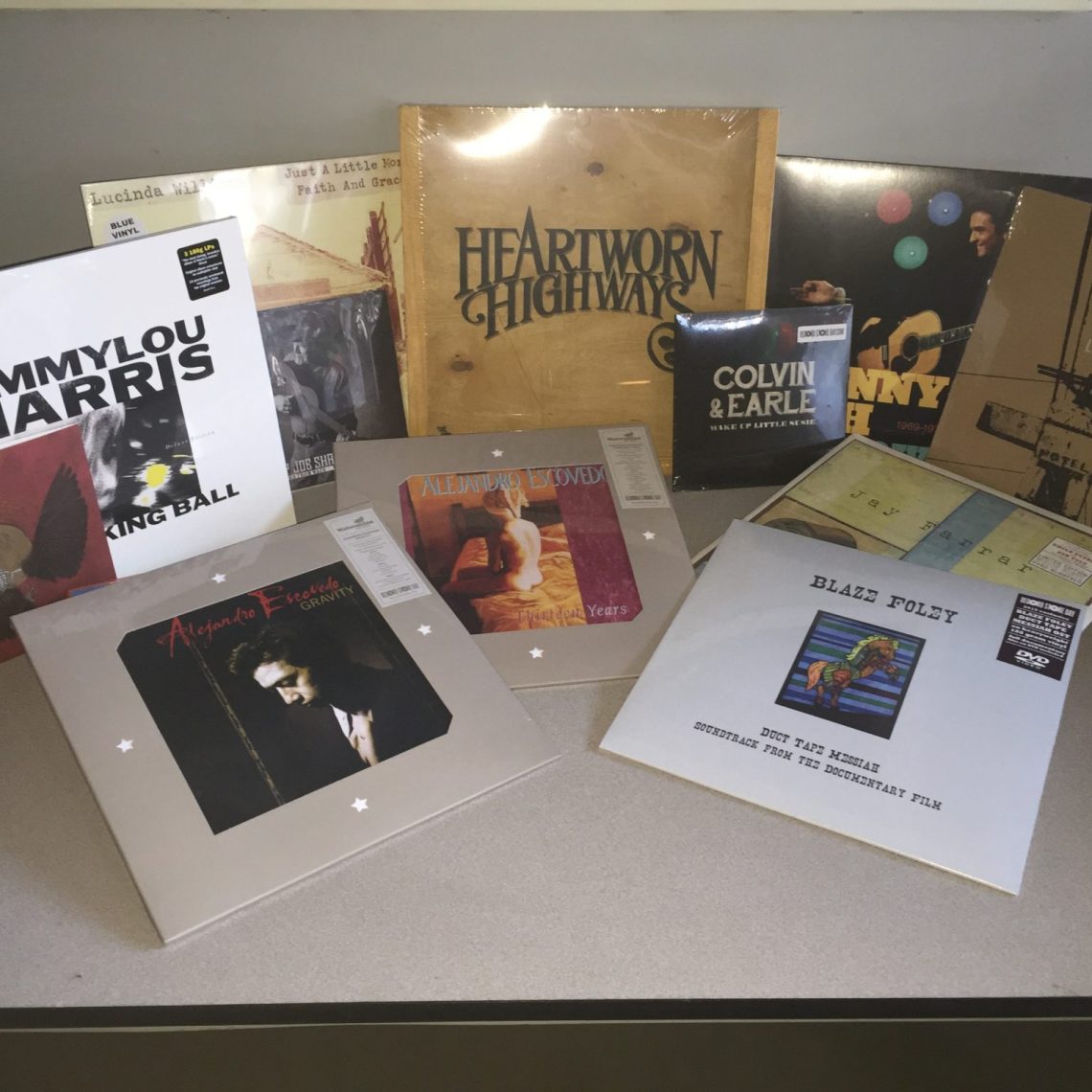 As any self-respecting (and/or self-loathing, come pay-up time) vinyl junkie already knows, Record Store Day is Saturday, April 16. Out of the hundreds of limited-edition titles from across all genres hitting brick ’n’ mortar record stores around the country and world this weekend, here’s a dozen of our picks from this year’s RSD bounty that fans of Americana and Texas music might want to keep an eye out for. Happy hunting, folks!

1) Various Artists, Heartworn Highways — 40th Anniversary Edition Box Set
Yes, this beauty (limited to 1,500 copies) will set you back a bit, but rest assured, skimpy it’s not. Weighing in at just over 5 lbs, this heirloom-worthy, hand-crafted wood box (by Boles Studio in the Bronx) packs a region-free DVD of the renowned 1976 documentary film by Jim Szalapski (with restored video and audio and 45 minutes of bonus footage), a double vinyl LP soundtrack (on “whiskey” colored wax), digital download card, an 80-page, LP-sized book with a lengthy essay on the making of the film and tons of photos, and a 24” x 36” poster. Artists featured on the soundtrack and in the film, which examines the progressive country/songwriter scene of the mid-70s, include Townes Van Zandt, Guy Clark, Steve Earle, Rodney Crowell, John Hiatt, Steve Young, Larry Jon Wilson, David Allan Coe, and Gamble Rogers. (MSRP: $169.99)

2) Emmylou Harris, Wrecking Ball Deluxe Edition
This Daniel Lanois-produced Emmylou Harris album from 1995 — arguably every bit if not even more influential on modern Americana as any of the songbird’s landmark records from the ’70s — first got the “deluxe edition” reissue treatment on CD last year, but this marks its debut on wax. The three-LP set features the original album remastered on “audiophile” 180g vinyl, plus 13 bonus outtakes. (MSRP: $44.99)

3) Son Volt, Live at the Bottom Line, February 12, 1996
Here’s your time capsule back to heyday of the mid-90s alt-country boom, when the No Depression crowd, still reeling from the break-up of Uncle Tupelo, took solace in the promising debut albums from Jay Farrar’s Son Volt and Jeff Tweedy’s Wilco — and often took to passionately debating which was better. For many, Son Volt’s Trace (“Windfall,” “Tear Stained Eye”) won that first round handily, and this 18-track set on two 180g LPs captures the band’s original lineup of Farrar, Jim Boquist, Dave Boquist and Mike Heidorn in peak early form at New York’s intimate Bottom Line. (MSRP: $31.99)

4) Jay Farrar, Sebastopol / ThirdShiftGrottoSlack
And speaking of Jay Farrar, here’s the Son Volt founder’s 2001 full-length solo debut, making its first appearance on vinyl — on white wax, no less, hand-numbered and limited to 1,000 copies. “Side D” of the two-LP set features Farrar’s 2002 EP, ThirdShiftGrottoSlack. Gillian Welch guests on Sebastopol, along with members of the Flaming Lips and Superchunk. (MSRP: $45.96)

6) Alejandro Escovedo, Thirteen Years
The first two solo records (originally released on Watermelon Records, reissued here on vinyl for the first time by New West) by the acclaimed punk/roots rocker (Nuns, Rank and File, True Believers) turned Americana elder statesman (and No Depression magazine’s “Artist of the Decade” for the ’90s). Both remastered albums (produced by the late Stephen Bruton) are presented on 180g double LPs — the music taking up three album sides each. Digital download cards are also included. Escovedo has released many more excellent albums over the last two decades, but Gravity (“Broken Bottle,” “Five Hearts Breaking,” “Last to Know”) and Thirteen Years (“Ballad of the Sun and Moon,” “The End”) remain two of his absolute finest efforts to date. In a word, essential. (MSRP: $24.99 each)

7) Lucinda Williams, Just a Little More Faith and Grace
“Faith and Grace,” the closing track on Lucinda William’s widely acclaimed 2016 double album The Ghosts of Highway 20, clocks in at a lean and mean 12 minutes and 45 seconds. Turns out that was the just the edited, fun-sized version. This 12” single (on blue vinyl, limited to 3,000 copies) features an epic 18-minute “Voodoo Mix” of the song on side one, and an 8-minute “Dub & Space Mix” of the track on side two (along with a 7-minute “Fear Monger Mix” of another Ghosts of Highway 20 song, “Foolishness.”) (MSRP: $10.99)

9) Billy Joe Shaver, “Wacko from Waco” / “When Fallen Angels Fly” (7”)
Remember that time back in 2007 when Billy Joe Shaver, the original honky-tonk hero’s honky-tonk hero, shot a man in the face (but didn’t kill him) during an altercation outside of a bar in Waco, the very week that he was releasing a gospel album? Well, Shaver of course went on to write a peppy little outlaw ditty about it, which makes its debut on wax here backed with a previously unreleased version of one of his older gems, “When Fallen Angels Fly.” (MSRP: $8.99)

10) Blaze Foley, Duct Tape Messiah (Original Soundtrack)
In addition to 14 rare tracks (many making their first appearance on vinyl) culled from the scattered archives of this legendary Arkansas-born, Texas-based singer-songwriter (the inspiration for Townes Van Zandt’s “Blaze’s Blue” and Lucinda Williams’ “Drunken Angel” and the writer of the title track to Merle Haggard’s critically acclaimed late-career comeback album, If I Could Only Fly), this limited-edition (1,000 copies) soundtrack to the 2011 documentary Duct Tape Messiah also comes with a DVD of the film itself. All that’s missing is a big cheeseburger and good French fries. (MSRP: $29.99)

11) Shawn Colvin & Steve Earle, “Wake Up Little Susie” / “Baby’s in Black” (7”)
Can’t wait for Shawn Colvin and Steve Earle’s full-length duo album, Colvin & Earle, due out June 10? Then here’s a fun teaser to help tide you over: A little Everly Brothers on Side A, and a bit of Beatles on Side B. (Earle, in case you didn’t know, is an avowed Beatlemaniac.) (MSRP: $5.99)

12) Johnny Cash & Various Artists, The Best of the Johnny Cash TV Show: 1969-1971
Highlights from the Man in Black’s stint hosting his own popular variety show, featuring performances by Cash himself (including “I Walk the Line” and “Flesh and Blood”) alongside turns by such legendary guests as Kris Kristofferson, Tammy Wynette, Ray Charles, George Jones, Waylon Jennings, Roy Orbison, James Taylor, and even Derek and the Dominos. Originally released by Columbia/Legacy on CD in 2007, this is the compilation’s first time on vinyl (limited to 5,000 copies). (MSRP: $21.99)