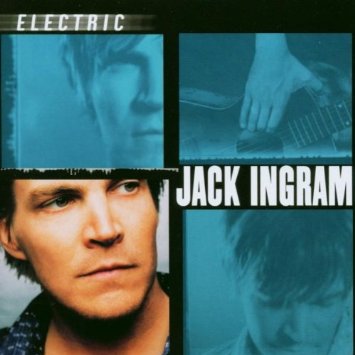 Jack Ingram may have been the first solo Texas singer-songwriter to pop up in the direct wake of Robert Earl Keen. Keen had blazed a trail in the late-80s and early-90s by amping up his sometimes-dark, sometimes-funny, often-darkly-funny original folk music with a crowd-pleasing country-rock band and a healthy dose of distinctive onstage personality. Younger crowds with at least a touch of redneck in their DNA had already started gravitating to the beer-bash atmosphere of Willie Nelson and Jerry Jeff Walker shows, following legends who were still coasting on well-earned goodwill from their Outlaw Country-era accomplishments. Keen proved that a younger man without any leftover cache could rock a similar crowd, and as such he became an inspiring figure to more than a handful of young folks who wanted to figure out how to transition from Keen fan to Keen colleague. Arguably the first to take a serious shot at it was Jack Ingram.

“Arguably,” because Pat Green swung in around the same time with a similar sound (at least at first) and background, and though on one hand his rising tide lifted many boats, on the other it somewhat overshadowed Jack Ingram. Green’s initial rise was a full-frontal assault on music business expectations: stay independent, stay relatable, stick to what works as your talents catch up to your appeal, and watch your crowds and venues get bigger every few months. Ingram’s career was more of a stick-and-move, full of promising leads and false starts and intriguing choices that didn’t hold the same crowd-snowballing momentum but gamely kept his fans guessing.

A couple of low-budget, mostly-acoustic albums got Ingram rolling in the mid-90s (now available in compiled form on Young Man), and he stuck to his low-key gifts on 1995’s Live At Adair’s, a nicely subtle counterpoint to the barnstorming live albums that some of his rowdier colleagues were starting to put out. But his long-game instincts were leading him towards Nashville at a time when other Texas songwriters were scoring points by getting crowds to chant “Nashville sucks!” and buy t-shirts that said as much. It was a pretty dire time for mainstream country, at least artistically — lots of sappy family-friendly balladry and lame redneck humor atop the charts — but to young strivers like Ingram, Nashville didn’t suck at all if you looked at it from the proper angle.

His first angle was making a scruffy country-rock record (Livin’ or Dyin’) with Steve Earle as producer; compared to his first records, the punchier sound was a better overall fit for both his gravelly, expressive voice and his less-wordy-than-Keen songwriting instincts. 1999’s Hey You was even better, jumping labels from Rising Tide to Sony’s Lucky Dog imprint and hitting a new songwriting high with the searing “Biloxi,” the jangling “Work This Out” and the Buddy Holly-esque title track. Between the two albums, there were about a dozen songs that should have been respectable hits in a more just world, but they were mostly ignored in Nashville (despite some aggressive promotional effort) and a bit underappreciated even in the friendly home turf of Texas.

On the upside, the “sellout” backlash was minimal (the still-holds-up-nicely quality of the albums themselves probably had a lot to do with that), and Ingram was free to experiment. If the catchy, radio-friendly stuff wasn’t working, why not just let the guy go a little farther out on that limb? For the follow-up to Hey You, Lucky Dog doubled down on the edgier side of Jack, assembling a dream team that seems even dreamier if you’re somewhat of an Austin music junkie. Co-writer and musician credits included the likes of Bruce Robison, Patty Griffin, Jon Dee Graham, Bukka Allen and David Grissom. The album was helmed by producers Mike McCarthy (best known for his work with seminal Austin alt-rockers Spoon) and Frank Liddell (who would later be known for helping Texans like Miranda Lambert and the Eli Young Band bridge the gap to the radio mainstream). The roster of contributors looks comparable to a cast and crew list for Game of Thrones, so Electric certainly ran the risk of coming out overcooked. But somehow, it was just right.

“Just right” doesn’t mean perfect, to be clear. Ingram and Electric were okay with being messy sometimes. The record opens with a loose, jagged jam called “Keep On Keepin’ On” and then, just around the time the listener might be waiting for something profound to drop, the band takes a quick break and Ingram asks “ain’t it funny how the truth sounds so clichéd?” The vibe recurs later on the record with “Everybody” and “We’re All In This Together,” raucous honky-tonk-tinged cousins to the opener with traces of barrel-roll piano and steel guitar peeking through the wall of distorted electric guitars. Elsewhere the album digs into emotional wreckage with stormy sounds to match: “What Makes You Say” and “You Never Leave” shoot for airy wide-open sounds that make the loneliness at the heart of the lyrics even more acute, and “One Lie Away” contemplates romantic deceit over an incongruous mix of sparse tom-tom drums and twangy guitar. Interestingly, the one track invested with a radio-single tightness is also its only unabashed love song, the propulsively heart-on-sleeve “One Thing.” “One thing I know in this world/Is I need you to be my girl.” Again with the cliché that’s nothing less than true … as with most Ingram songs (and, arguably, most country songs) the interesting stuff is in the verses and the hook is as direct as it gets.

Ingram also borrowed wisely from a couple of under-the-radar alt-country greats from outside of the Texas/Oklahoma scene. Scott Miller’s “I Won’t Go With Her” might be the record’s hardest-rocking song, see-sawing between amusing spoken-word verses and a biting, staccato chorus that’s still catchy as hell. And what may be the album’s most enduring track — the closing “Goodnight Moon” — was a loaner from veteran singer-songwriter/guitarist/producer Will Kimbrough. The Kimbrough original was on the surreal edge, sung in a spooky tenor warble; Ingram’s take on the song kept the shimmering guitars and sparse rhythm, but took it someplace more wistful and relatable with the gravity of his better-all-the-time vocal grit. Like the children’s book it shares a title with, the song is almost nursery-rhyme simple but digs a deep well of emotional weight in the delivery.

“One Thing” didn’t make much hay as a single, and overall the album got some positive notices but it didn’t hit the suggested goals of landing Ingram atop the heap of adult-album-alternative or some version of modern rock. The sessions spawned a pretty cool EP of leftovers (Extra Volts) and the record itself has grown in reputation with time, although in the nearer aftermath Jack Ingram underwent another career makeover into something resembling a mainstream Nashville star (finally! Never give up, people) with a No. 1 hit single in 2005 and a head-scratching (although hard-earned) win for the Academy of Country Music’s “Best New Male Vocalist” award of 2008, over a dozen years into a fairly prolific career. Soon to follow were a couple of worthwhile but more modestly successful singles, an ill-advised modern rock cover, a surprisingly long break from recording after 2009’s mainstream-ish Big Dreams & High Hopes, and perhaps best of all: a new album expected this year. Anyone who’s seen Ingram in concert recently knows that his wit has gotten dryer and sharper, his restless songwriting muse has been reactivated, and his urge to cater to industry pressures is more or less out the window. His truest music may be yet to come, but Electric will always be well worth a revisit. — MIKE ETHAN MESSICK