LSM State of Mind: Singing the “RSD” blues Why Record Store Day isn’t all it should and was meant to be — and how I’d fix it. 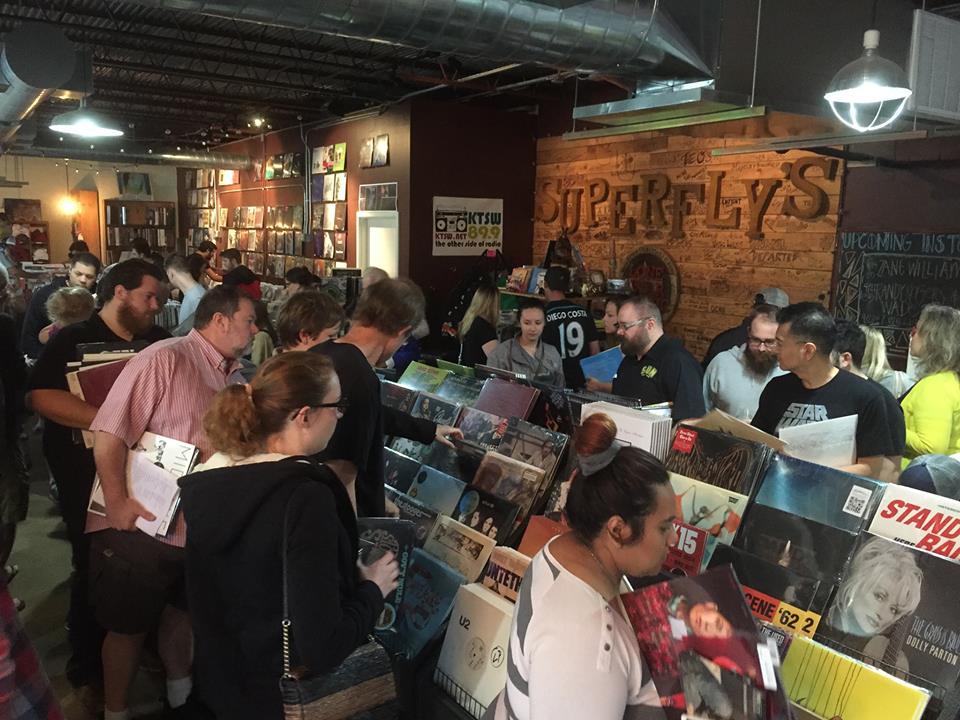 Record Store Day! If you dig vinyl, or music of any kind, Record Store Day sounds like a good thing — and by all accounts, it did indeed start out that way.

I’ve been on a pretty serious (and, ahem, somewhat expensive) vinyl jag for about three years now I guess. I hate to even try to calculate how much I’ve spent, but I do so dearly love my record collection; as a whole, it’s more or less my most prized possession. There’s just something about vinyl. The way it sounds, obviously, but also the tactile part: the great big cover art, even the way it smells. What seems like an intolerable hassle for the iPod crowd — the hassle of storing it and caring for it and handling it – is almost like being in charge of a kid. It’s not easy, it’s occasionally frustrating, and it’s expensive, but it’s also immensely rewarding. It’s a true labor of love, where the effort itself ends up being something to be proud of and feel good about. Plus, as a child of the ’70s and ’80s, my records quite literally take me back to my youth; a good percentage of my vinyl pile is made up of albums I had as a teenager.

Another big part of the vinyl thing is the warm, fuzzy feeling of having supported my friendly neighborhood record store — a business model that would have failed long ago, frankly, had it not been for vinyl’s popular resurgence over recent years. I take great pride in every purchase I make at my neighborhood store: Antone’s Records, on the Drag just north of the University of Texas. I feel that each time I buy there, I’m buying in. It’s like I’m an investor, and in terms of what I get out of the cultural value of having a storied old institution like Antone’s thriving in my ’hood, I think considering this support an investment is valid. My money is going toward keeping my part of town cool. Vinyl is great, but it’s still an endangered species, so anything that helps keep it going is also great, right?

Well … as is frequently the case, it’s not necessarily that simple.

Record Store Day is coming up this weekend (Saturday, April 16). If you’re not in the know, that’s the day when a bunch of well-meaning artists — vinyl enthusiasts themselves in many cases, I’d wager — get together to provide independent record stores across the country (and world, actually) with special limited-edition vinyl releases. It happens twice a year, once in April and again on Black Friday the day after Thanksgiving (though the April RSD is really the main one, with the greatest amount of releases.) The idea, obviously, is to entice flocks of folks to crowd into the stores and buy up all these rare and exclusive goodies while the getting’s good, thus providing a needed and predictable economic boost, which clearly should be great for Mom and Pop. The main problem with all this from the consumer’s perspective, though, is who ends up getting their hands on the goods: increasingly, that’s not Joe Six Pack, like your humble writer, but rather Ernie EBay. Online resellers, knowing a captive market when they see it, line up early in the morning and, as soon as the doors open, aggressively buy as much of this limited edition stuff as possible — not for the purpose of filling out a prized record collection, but to turn around and sell these rare records to the highest bidder. Just knowing this process is in place is almost enough to turn me away, as I am less than inclined to get into a Black Friday-style shoving match with some eBay guy over a Mastodon record.

Last year, one of my favorite albums of all time — one that, back in the mid-90s, quite literally turned my tastes on a dime towards the world of Texas Country music, and that was thus of very real influence over both my personal and professional life — was one of the limited-edition releases on Record Store Day. The chance to have Robert Earl Keen’s Gringo Honeymoon, to that point only available on CD or download, in my vinyl library was a sweet prospect indeed. So, I called Antone’s to see about holding a copy back, and the clerk — who I know personally, by the way, being a regular customer and all — told me, “Sorry, can’t do it. Make sure you’re here to be in line when we open.” Well, work and family call, and I couldn’t make it. By the time I did get there, about 15 minutes after they opened that morning, both of the two copies of Gringo Honeymoon that Antone’s had been serviced were gone … as was anything else even remotely interesting that wasn’t a pricy box set. You’ll forgive me if I was a tad bit bummed about all this.

You’d think that record stores, who certainly appreciate what their regular customers do for them, would go out of their way to take care of their regulars — and I do think they want to, but from what I’ve heard, the people who put on Record Store Day make the whole thing extraordinarily and increasingly complicated for retailers. There are rules, for instance, regarding how high a record can be priced in the store — clearly a boon for an online reseller, who can flip a limited edition release that same day for as high as desperate collectors are willing to pay. RSD rules also strictly forbid any advance reserving of product for loyal customers, or even the notion of letting the home crowd have first crack at the goodies before the EBay types get to clean it out. (Note: Stores are forbidden from selling their RSD titles online above MSRP for 30 days after RSD — though word on the street is that some owners and employees ignore this.)

There’s also the reality that, however busy the traffic may be on RSD, ordering all those special releases is still a risk for store owners, especially given that unsold stock can’t be returned. Apparently, this is actually the case with all vinyl releases these days; but whereas a store can usually order as many or few copies of a typical new release as needed to meet the demands of its regular customer base (and re-order more as needed), when it comes to RSD product, there’s often no telling which titles will fly out the door and which ones will go untouched. And although they’re under no obligation to order every RSD release, in order to stay competitive and keep up with the whims of collectors beyond their regular customer base — including vinyl newbies lured to the RSD flame by random head-scratchers like Justin Bieber picture discs — there is a pressure to try to stock as many different titles as possible. Making the whole deal even more of a gamble for them is the fact that owners often have to place their RSD orders before even knowing just how limited certain titles actually are, leading to instances where they either order too many copies of a release that turns out to not be that limited after all or are only allocated a fraction of their order in the first place. That in turn leads to disappointed customers (no Gringo Honeymoon for me) and boxes of RSD left-overs that shops can’t even get rid of at a steep discount months or even years down the line.

So, as you can see, what in theory should be great thing for both customers and stores alike gets twisted into something that’s not so good after all. But as a good friend of mine said to me recently, “a complaint lodged without a solution is just whining.” So, here’s my humble solution: The Record Store Day Loyal Customer Club. If I buy at least one record per month from a particular store over the course of a year, I’m in the club, and I get two privileges in exchange for my sustaining patronage. First, I may call ahead and reserve one item from the annual Record Store Day release list; better yet, I may pre-order an item from the list in advance, so that my store is sure to have it (“allocations” permitting, of course). Second, I get first crack at the rest of the RSD inventory on the big day via an advance access hour, to be held before the store normally opens. Voila: Happy loyal customer!

My bet is that there are myriad reasons this solution is unworkable, and I’m sure I’ll hear about ’em all. But regardless, something’s gotta be done for those of us who do the real heavy lifting for the vinyl resurgence all year long — not to mention Mom and Pop and Antone’s, whose return from all of this trouble is diminishing year after year. I love what Record Store Day was intended to be, but it’s high time that the inequities that have crept into the system are addressed. It should be great for the entire vinyl community, not just for the black market and Record Store Day itself.