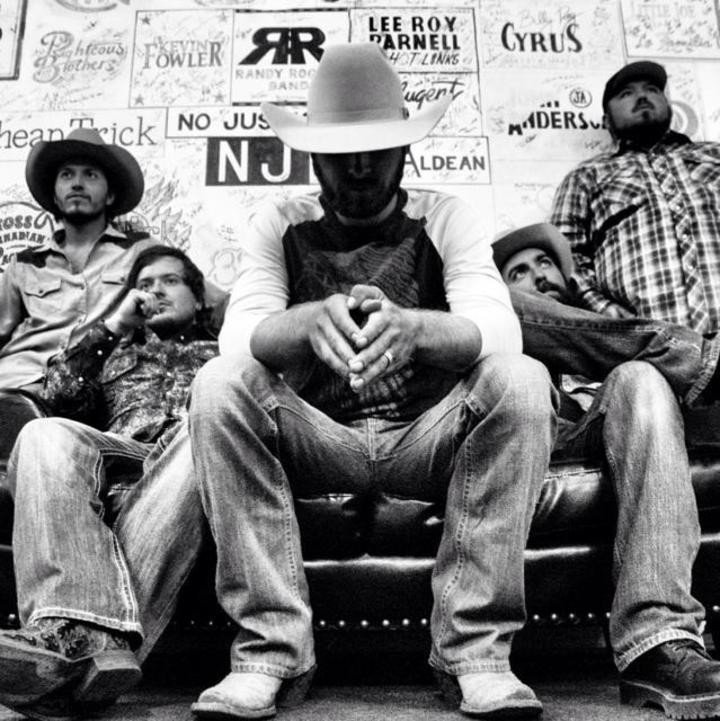 It’s early evening on the last Saturday in March, and the five members of Dolly Shine are sitting around an expanded metal patio table behind Lubbock’s Blue Light, getting ready for load-in. “You see this white hair right here?” asks Ben Hussey, pointing to his Rick Rubin-sized beard with a hearty chuckle. “That one’s Zack.”

He’s talking about Zack McGinn, the band’s lead vocalist, who is changing out the strings on his acoustic guitar. Although Hussey hasn’t officially been a part of the Stephenville, Texas-based band for long, the fact that he’s already named one of his facial hairs after the frontman suggests that Dolly Shine has had quite an influence on the long-bearded bassist — and the impact has been nothing if not mutual.

Hussey, the former founding member of Six Market Blvd., has for the last two years jumped around playing with a handful of different bands and artists — primarily Red Shahan, the Damn Quails, and Jonny Burke. All the while, he’s been recording up-and-coming acts at Boyd Street Recording Studio, a studio he founded with fellow 6MB member Josh Serrato. One of Hussey and Serrato’s first production projects at Boyd Street was All In, Dolly Shine’s third studio release. Recorded in 2014, it found the band growing into their own by surrounding McGinn’s drunken recollections of small-town scenes with chugging guitar tones and driving fiddle lines that naturally drew comparisons to the likes of 6MB, early William Clark Green, and at times, Reckless Kelly. For the follow-up, Walkabout, Hussey ended up pulling double duty as both co-producer and a band member.

“I think having Ben in the band and on the production side, it was a blessing,” says McGinn. “He came to us when we really needed him. We used to write a bunch of songs and then shot from the hip. I think this time around, we’ve been more methodical and tried to make a more professional version of our previous albums.”

“We got to sit in the studio and write,” adds drummer Johnny Goodson. “This time around, when we had production in August, it was us together as a group — it was the band writing the album as a whole.”

Walkabout, due for release June 10, expands upon Dolly Shine’s distinctive grit and edge, part West Texas dust and part rich, earthy Oklahoma Red Dirt. But there’s an attitude throughout that feels entirely new to Dolly Shine’s sound: it’s as though the band has been meandering around in the sweltering desert for the last few months only to have dirt kicked in their face once they hit civilization. The album’ sun-soaked lyrics have a callused maturation to them that the band couldn’t have produced years before, with songs like the lead single, “Rattlesnake,” that find McGinn transforming into a weathered, grizzled drifter floating around the badlands between Mexico and the Trans-Pecos.

“I was driving out through West Texas, going out to the Big Bend country, and I was trying to capture that landscape and environment,” McGinn says. “I tried to make it about the desert originally, but then it kind of turned when I began thinking about some old rodeo buddies of mine. I think musicians and rodeo hands are tied and linked in close to one another because of their lifestyles.”

The song, originally called “Desert Tune,” still perfectly captures the lonesome wilderness of West Texas, though, with sepia-toned fiddle lines that recall trains howling off in the distance and lines like “windmills and pump-jacks, this old forgotten town” that detail the vast, empty space of the terrain. According to Hussey, it was “Rattlesnake” that originally set the bar for the rest of the record, encompassing the primary tones the band wanted to work with.

“But, it ended up growing beyond that,” the producer/bassist explains. “I think if we had stuck to those original plans, the record would have become redundant.”

“Old Flames,” “Closing Time,” and “Anywhere Close to Fine” show McGinn and company are still able to write heartbreaking ballads about lost lovers and small town drama with the best of them, while “Blackbird,” “Hitchhiking,” and “Snakeskin Boots” find them diving further into West Texas fables, Red River tales, and American lore. “Snakeskin Boots,” penned by guitarist Jerrod Flusche, is a direct and frank retelling of a chilling tale of a meth-selling cousin who goes missing.

“I was living in Denton before I really pursued music, and where I’m from, meth and things like that are a big deal,” Flusche says. “People are hooked on it and ruins a lot of lives. I was thinking about that situation.” The murder ballad features distinctive lyrical details reminiscent of Ray Wylie Hubbard, Chris Knight, or James McMurtry — and according to Hussey, originally leaned in a rather McMurtry musical direction, too.

“It had this almost boogie-woogie thing to it, and if we’d proceeded to go that direction, it’d have probably been more of a ‘Choctaw Bingo’ type deal,” he explains. “We realized we were going too far in that direction, so we stripped it down and grooved it out a little more.” It ultimately took a turn into more Turnpike Troubadours territory, with a sharp, piercing guitar lick driving the song along — and Wesley Hall’s fiddle adding a haunting component to the aggressive fireball.

“We’re still growing and learning,” says McGinn, “But I feel like this is a more mature, seasoned group of guys. You get everybody’s personality on Walkabout. It’s been much more of a collaborative effort.”

Next post LSM State of Mind: Singing the “RSD” blues