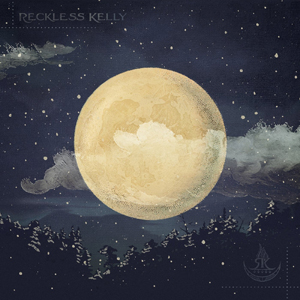 It wouldn’t be hard for an amateur anthologist to come up with sort of a shadow history of Reckless Kelly as a thoughtful, downbeat country-folk band, more Flying Burrito Brothers than Creedence and more akin to, say, Bruce Robison than Cody Canada. There are at least a couple of subtle, lyrical, and decidedly non-rocking gems tucked away on any given RK release, but on Long Night Moon, the band’s eighth studio album, that approach is nudged towards center stage. It’s got less punch but more weight than 2011’s Good Luck & True Love, with a couple of taut rockers in the mix (including the particularly bracing “I Can’t Stand It” and the breezy “Real Cool Hand”), but an overall autumnal, quietly restless feel befitting the title. The rambling but compelling title tune bookends the work with a welcome reprise slipped in as a penultimate track for those of us that still listen to whole albums, establishing a contemplative thread that seeps in around the edges of simple hooks like “Didn’t Mean to Break Your Heart” and “The Only Home I’ve Ever Known.” Chief songwriter and singer Willy Braun remains in control of his twangy, buzzy voice, with gravel around the edges but warmth at the center, rangy without being showy and dynamic while still giving the lyrics room to breathe. Really, there’s balance at work everywhere, keeping the rock tempo of “The Girl I Knew” down to earth with purring, close country harmonies, as well as giving the pensive “Be My Friend (In Real Life)” some electrifying David Abeyta guitar barbs to enliven an anti-tech sentiment that seems at home among songs that sound well-suited for a circle of particularly talented campfire pickers. By the time the big-sky sonics and yearning vocals of “Idaho” bring the whole thing to a close, it feels weary and resilient all at once — just like a veteran band that rarely leaves the road but, once in the studio, seldom fails to make the most of it. — MIKE ETHAN MESSICK

Previous post Sarah Jarosz: "Build Me Up From Bones"