Sarah Jarosz: “Build Me Up From Bones” 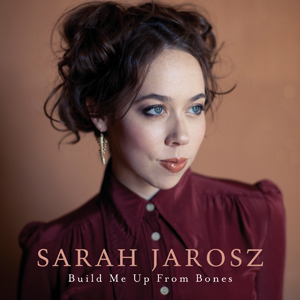 SARAH JAROSZ
Build Me Up From Bones
Sugar Hill

Even as a teen, Sarah Jarosz seemed preternaturally mature and self-assured. But with her ascent into adulthood, the Wimberley native has reached a new level of confidence, and it permeates every gorgeous note of this album. Her lyrics are even more literate; her singing even more nuanced; and her arrangements reveal the sophistication she gained during her just-completed New England Conservatory of Music studies. “Over the Edge,” co-written by Jedd Hughes (who contributes harmonies and guitar) is an elegant, intricately embroidered work of seamless beauty, featuring Dan Dugmore’s lap steel slurries and Eric Darken’s gentle percussion alongside Jarosz’s octave mandolin. On the title tune, bow work by bandmates Nathanial Smith (cello) and Alex Hargreaves (violin), delivers the perfect counterpoint to her vocals and Aoife O’Donovan’s harmonies. Accompanied only by Smith’s cello on Dylan’s “Simple Twist of Fate,” Jarosz turns it into a sultry near-torch song, spare and beguiling, with phrasing that reveals her extensive jazz studies. On “Mile on the Moon,” another Hughes co-write, her alto resonates wonderfully against various instruments, including accordion. She turns Joanna Newsom’s “The Book of Right-On” into a playful bit of plucked and pizzicato interplay. She hands the mandolin to Chris Thile and picks up a banjo for “Fuel the Fire,” the only track here that exposes her bluegrass roots. She hasn’t forsaken them, but, like Elvis Costello, Jarosz has the potential to go in any direction she wants. Her continued evolution should be fascinating to behold. — LYNNE MARGOLIS

Previous post Brennen Leigh & Noel McKay: "Before the World Was Made"