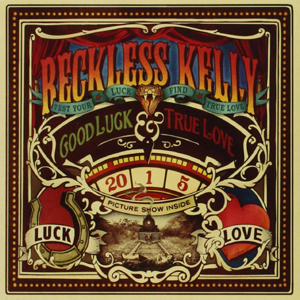 The guys in Reckless Kelly are not known for shying away from a good time or from imparting that sense of boot-stompin’ fun to their audiences. So it’s a little surprising to note that the major mood permeating Good Luck & True Love is melancholy. There’s an inescapable sense that the wandering life has worn them down, that disappointments have taken their toll and that luck and love have run off together, despite lead singer-songwriter Willy Braun’s assurance that not every song is autobiographical.

The album, their debut release on their own No Big Deal Records, contains a little more introspection and a little less swagger than we’ve heard in the past from Braun and the band. But by dropping some of the bravado, he gives us more naked honesty — and lyrical strength — than he’s ever conveyed before. There’s serious heartbreak in “Weatherbeaten Soul” and “I Stayed Up All Night Again” (“It ain’t the first time I stayed up all night again writin’ a song about you”). And despite the cheery chorus in the rockabilly-tinged title tune, the call-and-response lyrics (“I don’t believe in good luck/I don’t believe in true love”) speak volumes.

“Save Me trom Myself” nostalgically references the ties that bind — in his case, a super-strong family that includes brothers Cody (fiddle) and sometime-writing partner Micky (of Micky and the Motorcars), who contributed to “Guarded Heart.” The charming “I Never Liked St. Valentine,” co-written with Todd Snider, is another declaration about being unlucky in love. But in the end, with the rockin’ “Hit the Ground Runnin’,” — a song tailor-made for a truck commercial — Reckless Kelly declares once again that the road is their main mistress. And they’re going to stick together for a long, long time. — LYNNE MARGOLIS