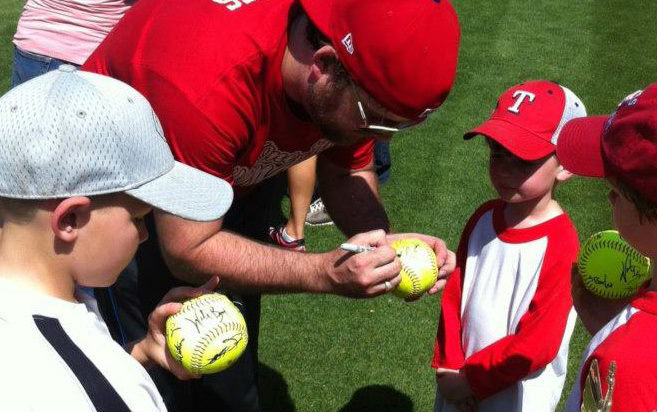 Being on a winning team — even one called the One Hit Wonders — has its advantages, as Lone Star Music owner Zach Jennings found out after said Wonders triumphed over the Sultans of Swing at the fifth annual Reckless Kelly Celebrity Softball Jam at the Dell Diamond on April 14. Jennings contribted two base hits to his team’s winning effort, which was apparently enough to warrant a few impressionable young autograph seekers. “I told them they really didn’t want my autograph,” insists Jennings, whose teammates included such admittedly more famous names as Wade Bowen, Charlie Robison, Roger Creager, Kelly Willis, Micky Braun, and Kyle Park — not to mention former Major League Baseball players Brooks Kieschnick (the game’s MVP), Jeff Kent , Kelly Wunsch, Glen Wilson Sr., and Sam August. That said, though, the kids didn’t exactly have to twist his arm to get his pen moving. Performers after the game included hosts Reckless Kelly and most of the aforementioned artists, plus such other Texas music all-stars as the Departed, Hayes Carll, Dale Watson and surprise guests Randy Rogers and Kevin Fowler. Proceeds from the event will go towards helping to equip seven area youth baseball and softball teams in addition to field and facility upkeep. One bum note, though: Liz Foster of the Trishas (and the Sultans of Swing) suffered a broken collar bone and a separated shoulder  as a result of a dizzy bat race mishap. Ouch! We wish her a speedy recovery, but remember: There’s no crying in baseball. Or softball, for that matter.