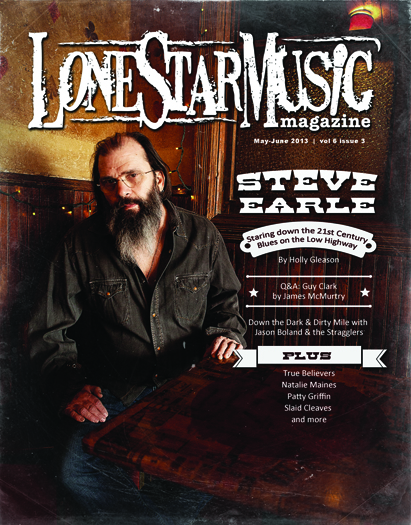 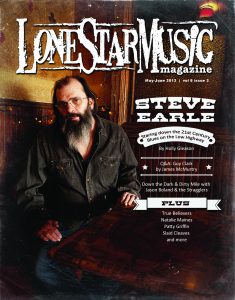 First and foremost, on behalf of all of us here at Lone Star Music, I would like to take this opportunity to thank everybody who contributed to making our Fifth Annual Lone Star Music Awards our best ever. I’ve got a list here somewhere of just a few folks in particular that I wanted to recognize, so if you’ll bear with me for just second … ah, here it is!

Well, obviously the list starts with all of the passionate music fans out there who took the time to vote for their favorite artists and albums in this year’s poll, and especially those who were able to make it out to the big awards show on April 28 at the Texas Music Theater in San Marcos. Y’all packed that joint and were a fantastic audience, which I’m sure played a big part in inspiring all of the performing artists to put on such great sets. And how ’bout those artists, right? Rob Baird, Six Market Blvd., Shinyribs, John Fullbright and Dustin Welch, Jason Eady and Courtney Patton, the Departed, Ray Wylie Hubbard, and Robert Earl Keen — not to mention all the individual band members and managers. I wish I could list them all  here, but I’m already getting dirty looks from our impatient art director, Melissa, who’s signalling for me to wrap this up so we can go to press. OK! I’m almost done, promise … Sorry, where was I here — ah yes, our sponsors! Rebecca Creek Distillery, Strait Music Company, Southern Thread, Texas Music Water, KOKE FM, Ziegenbock, and Cody’s Bistro Lounge — we could not have pulled this whole thing off without your generous support. Thank you, too, to the staff and management of Texas Music Theater, and also to Kent Finlay and his bar staff at Cheatham Street Warehouse for hosting our after party.

I know I’m probably leaving a whole bunch of folks out here, and I’m going to remember every one of them as soon as I’m finished and this thing’s off to the printer. But you know who you are and how important you were to the whole shebang, and that’s what matters, right? So let me end here by going off topic for a few minutes to wish a very happy belated 80th birthday to Mr. Willie …

Wait, what? Really Melissa? You’re freaking PLAYING ME OFF? Since when have you had your own pit orchestra?

All right, fine. For a full recap on the LSM Awards, including lots of photos and a play-by-play of who won what, just turn to page 4. And then keep reading all the way through to the end of the magazine, because we’ve got lots of other great stuff in here for you.  At the front of the book, D.C. Bloom profiles the Whiskey Sisters — winners of Best New Band at the Austin Music Awards back in March — and Lynne Margolis reports on the this-time-they-really-mean-it reunion of legendary rockers the True Believers, featuring two of Austin’s most accomplished solo artists, Alejandro Escovedo and Jon Dee Graham. In our columns department, guest “Heartworn Highways” writer Slaid Cleaves (whose new album, out the first week of June, is already one of my favorites of the year) looks back on his teenage rock ’n’ roll wonder years as a Magic Rat, and award-winning music journalist Michael Corcoran shines his “True Heroes of Texas Music” spotlight on Bobbie Nelson, who’s been making beautiful music with her little brother “Hughtie” (aka Willie) now for eight decades. For features, we’ve got Holly Gleason’s insightful cover story on the fearlessly outspoken and musically adventurous Steve Earle (whose discography is also given the “Mr. Record Man” treatment), Kelly Dearmore’s profile on Jason Boland and the Stragglers, and a Q&A with Guy Clark conducted by James McMurtry (yes, that James McMurtry). Meanwhile, back in reviews, it’s all about the women, with must-have new releases by Patty Griffin, Natalie Maines, the Pistol Annies, and Kacey Musgraves.

As you might have noticed, I left out George Jones (RIP). We were in the last stages of wrapping up this issue (and finalizing the awards) when he passed away on April 26, and didn’t want to rush-job an obit/tribute just for the sake of having something in before deadline. Rest assured, though, that the Texas-born king of country music will have a LoneStarMusic salute worthy of his legend in our next issue.