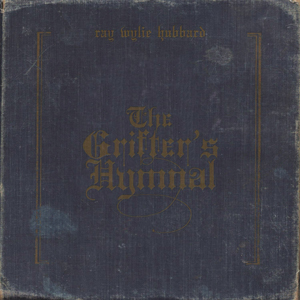 Like the faded songbook pictured on the cover of The Grifter’s Hymnal, Ray Wylie Hubbard’s music has a dog-eared duality. With plenty of wily word play for the thinking man and woman — and ample dancehall sing-a-long choruses for the drinking woman and man — Hubbard’s latest is, if not a career capstone, a mirthful reminder that brother Ray Wylie preaches that life is to be lived in and rocked out to. It’s to be deeply pondered and fully experienced — for better or worse — and played damned loud and in-your-face proud. If that means you’re pushing 64 and still in a honky-tonk, like some son of a redneck mother, so be it … as long as the music’s cool and the beer’s cold. And you’ve also read your Rilke and can quote Martin Luther King.

But lest anyone get MADD, it should be noted that both the quality and quantity of Hubbard’s musical offerings increased dramatically since the mid-90s when he put down the drink and focused more on “laying down the groove like a monkey gettin’ off,” as he sings on the head-snappin’ and rattle-shakin’ opening track, “Coricidin Bottle.” Since then he’s been on a roll — and a Les Paul/vox ac30 amped-up rock — that few other great Texas or Oklahoma singer-songwriters have ever equaled.

The dice keep a-tumblin’ with The Grifter’s Hymnal, as Hubbard sets off on a wild and wooly set of Stones-style ball busters that lead him straight to hell and back, paying a lyrical shout-out and musical homage to Joe Walsh’s James Gang along the way. On “New Year’s Eve at the Gates of Hell,” a fever-trip through a Rick Richards-driven, heart-pounding percussive purgatory populated with the likes of Fox anchors, Jim Morrison and music industry weasels, Hubbard suggests that God and Satan certainly must be in cahoots when it comes to matters of who gets consigned to the ever-burning brimstone. In this installment of his dangling conversation with the devil, Hubbard vents his brand of snake venom with no apologies, taking his anger and attitude well beyond the point of sinister exhaustion. But there’s also “Coochy Coochy” (the fun cover of a Ringo Starr tune that finds the Fab One of Two Remaining Beatles contributing guitar, handclaps and vocals), and the good times “South of the River,” featuring Ian McLagan on keys and a call to worship that “you need some good rockin’, nuthin’ painful.” Hubbard gets all autobiographical — with just a pinch of artistic embellishment, one suspects — with a re-telling of his wild younger years at the Dallas venue “Mother Blues,” when he was 21 and “all I wanted was a stripper girlfriend and a gold-topped Les Paul.”

But with a lifetime of real-world adventures behind him and his present seasoned perspective guiding him, Hubbard brings the swindler’s church service to a close with the ardent “Ask God.” Recorded live at the Edythe Bates Olde Chapel, the gospel blues number offers the pious advice, “when darkness swoops down on you, ask God for some light.” And while you’re at it, go ahead and count Hubbard’s The Grifter’s Hymnal as one of the richest blessings the musical gods will bestow in 2012. — D.C. BLOOM