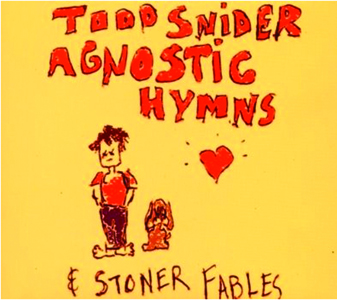 Eight years ago, Todd Snider’s masterwork East Nashville Skyline backed woozy wisdom (“Age Like Wine”) and wit (“Tillamook County Jail”) with the ace storyteller’s most elegant vignette (“Play a Train Song”). Subsequent albums (2006’s The Devil You Know, 2009’s The Excitement Plan), an EP (2008’s Peace Queer) and an outtakes collection (2007’s Peace Love and Anarchy) have all delved deeply into the American psyche, but none quite matched his career peak. His new Agnostic Hymns & Stoner Fables comes closest. As always, Snider tempers morality lessons with sharp one-liners. “You think I’m not very bright/And you might be right,” he taunts on the workingman’s blues “In Between Jobs.” “I might’ve been born yesterday/But I was up all night.” Snider’s most musically diverse album yet forms a compelling roots patchwork with deep grooves (“Digger Dave’s Crazy Woman Blues”) against country rock (“Brenda”) and buoyant folk (Jimmy Buffet’s “West Nashville Grand Ballroom Gown”). Lyrics balance faith waned (“Too Soon to Tell”) and regained (“The Very Last Time”) and frequently meet in between. “In the beginning, man wondered to himself/Why, oh why are we here?” Snider sings on the gnarly dirge “In the Beginning.” “And yet with each asking of this question/The answer would become even less clear.” The former Texas resident undoubtedly will mine the debate for many more years. As for now, this installment rattles (“New York Banker”) and shakes (“Big Finish”) without stalling once. — BRIAN T. ATKINSON