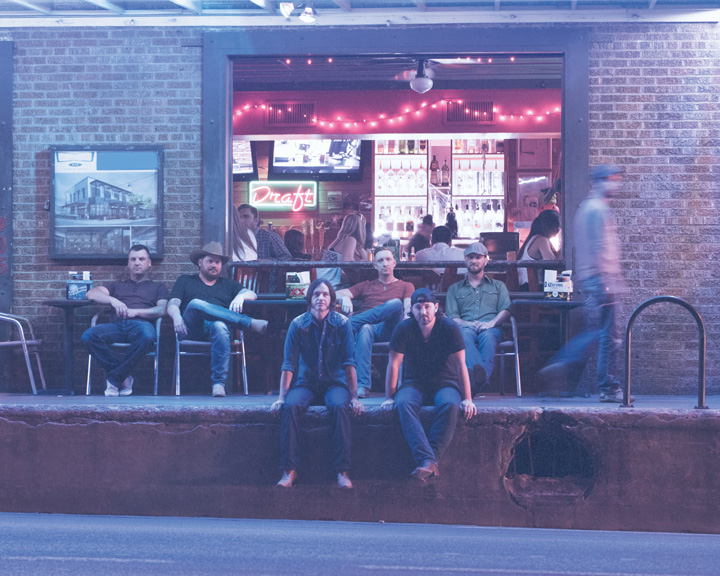 On March 2, 2015, the Texas music community was hammered with a tremendous loss when Kent Finlay, iconic founder and keeper of San Marcos’ Cheatham Street Warehouse, died at the age of 77. Among the many Texas artists who looked up to the songwriter’s songwriter as an instrumental figure in their career was Randy Rogers, who first played Cheatham Street as a college student 15 years ago and went on to sign his first record deal there. The Randy Rogers Band has since become one of the best-loved bands in Texas country music and become a national touring force, selling over one million records — but Rogers still makes it a point to play Cheatham several times a year (solo acoustic, but always sold out.)

Rogers learned of Finlay’s death on the very day his band was set to begin recording their seventh album, Nothing Shines Like Neon (out Jan. 15). So it’s no surprise that his late mentor is honored on the record: Not only is the album’s title taken from one of Finlay’s own songs (“Tennessee Whiskey and Texas Swing”), but Rogers was also inspired into finally cutting a song that had been waiting for the right moment to emerge. The new album’s “Look Out Yonder” (written by Earl Bud Lee, who wrote the Garth Brooks classic “Friends in Low Places”) may grab easy headlines for the notable contributions of Alison Krauss and Dan Tyminski, but the gorgeous song is a star here because of the meaning it now carries for Rogers.

“I’ve had that song on hold for years,” says Rogers, calling just before his band’s show at a hockey arena in Kearny, Neb., in front of more than 3,000 people. “I’ve loved it, but it never seemed to fit any of our past records. But after Kent passed, I played it for Buddy [Cannon, producer], and he couldn’t believe someone else hadn’t cut it yet, and I knew it was time for us to put it on a record. It wasn’t written for Kent, but to me, it’s about him.”

Later in 2015, Rogers and his wife suffered another tragic loss when their newborn daughter, Rumer Rain, died from natural causes after only a single week. Even for a self-proclaimed lover of “sad-sack country music,” such pain was a lot to take on. But now, well removed from those dark days, Rogers leans on the simple but profound lessons he learned that June week in the hospital. Lessons that inform the way he lives his life and the way he makes his music.

“I learned the importance of valuing the time I have with my loved ones,” he says. “I need to be the best daddy to my two daughters, I need to be a husband that’s available to my wife, and to be a son that’s caring to my parents as they get older. Wade Bowen was with me at the hospital that whole week, and he kept telling me, ‘Man up, and be there for your family,’ and that’s something I’ve taken more seriously since then.”

Speaking of Bowen, another major aspect to Rogers’ 2015 was the successful release of the Lloyd Maines-produced Hold My Beer, Vol I, a Rogers and Bowen duo album that sold well and was received by critics even better. It was the “countriest album” of Rogers career — until now, that is. Neon isn’t the typical RRB rock-flavored country record that’s been the five-piece’s stock-in-trade. While certain tunes, specifically “Actin’ Crazy,” the outlaw-flavored duet with noted badass Jamey Johnson, and “Takin’ It As It Comes,” a roadhouse rocker featuring the legendary party pipes of Jerry Jeff Walker, are both classic, good-time RRB anthems, those are exceptions to the rule. The rest of the album finds Rogers channeling his inner Dusty Wyatt Chandler — aka the character played by fellow Cheatham Street alum George Strait in 1992’s Pure Country.

“There was a conscious effort to make this record a very country-sounding record,” he says. “We’ve always had more traditional country songs on past records, but this time, our song selection was based on a theme of picking more true country songs than before. I’m still the kid that wore a Brushpopper shirt to sing Tim McGraw songs at the Burleson Opry. I’m still the kid who watched Pure Country more than probably any movie I’ve ever watched, so it was time for me to record songs like ‘Old Moon New,’ which to me, sounds like it could’ve been on the Pure Country soundtrack.”

For all the sorrow Rogers has felt in recent times, he understands and appreciates that desolation also propels some of the greatest country music ever penned. The new album excels in its woeful tales of heartbreak, loneliness and despair. And to be certain, songs such as “Old Moon New” and “Meet Me Tonight” — about a “poor son-of-a-bitch drinking a bottle of his ex’s favorite wine” — are every bit as tear-jerking as they are splendidly performed. For Rogers, sadness isn’t an excuse for wallowing, but a motivator to think, drink, sing, write, love, and especially in the past year, remember those who have impacted him the most, regardless of how long they were here with him.

“I still think of Kent everyday,” he says. “Every time I play a gig, I think about how he’s the reason I am where I am today.”

Next post Q&A: Catching up with Lee Ann Womack

Previous post Michael Corcoran’s “If I Had My Way”