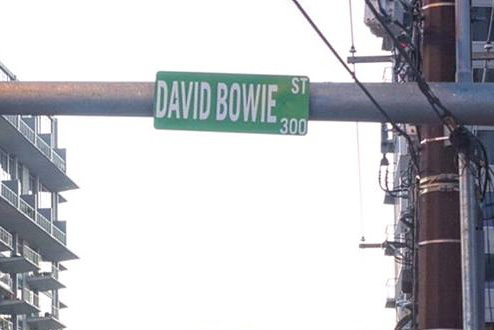 This was a guerrilla move. The city of Austin couldn’t order coffee in three days. But I hope they keep this sign up at the former Bowie Street. It’s on a block that’s as close to a cul-de-sac as you’ll see downtown. And South by Southwest is right there. Although David Bowie never appeared at SXSW as far as I know, he always loomed large in spirit and influence. Let’s not forget Bowie’s role in the “discovery” of Stevie Ray Vaughan at the 1982 Montreux Jazz Festival and subsequent recruiting of the young Texas bluesman as the lead guitarist for 1983’s Let’s Dance. Bowie himself certainly never forgot SRV. (See below.)

The city has announced that they had nothing to do with the renaming of Bowie Street. They are seeking the individuals responsible. But they will leave the David Bowie Street sign up for a few days in honor of the singer. I think they should move the sign from busy 5th Street to 3rd Street, where the Electric Lounge was, but keep it up permanently. Austin is getting great publicity worldwide over the “stunt.” “Keep it up, Austin!” That’s a good new slogan for whenever they’re trying to take away something cool. 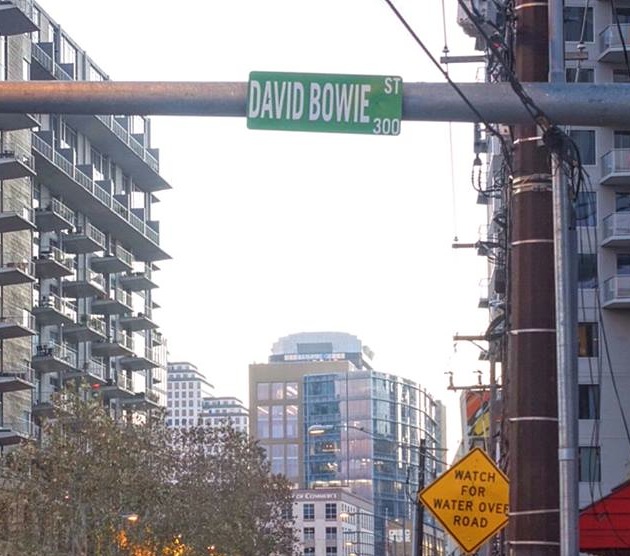 Keep it up, Austin!

When Epic Records released the Live From Montreux CDs in 2001, Bowie penned his memories of SRV:

I’m finding writing on an acquaintance who has passed on is not a little daunting. Memory recall is inevitably spotted with “If only” and “What ifs.” My association with Stevie ran a short course of only a few months, our relationship only a few weeks, so my anecdotal resources are limited to just a couple of stories.

Claude Nobs had for many years run the Montreux Jazz Festival in Switzerland. As I was living in a small village close to Montreux, the festival was an annual must. One night in 1982 Claude phoned me and told me of a new act he was putting on in a day or so. He knew that I was a big R&B and blues fan and thought I might enjoy this new kid. Come the show, blasting through a short but riveting set, SRV completely floored me. I probably hadn’t been so gung-ho about a guitar player since seeing Jeff Beck in the early ’60s with his band the Tridents at Eel Pie Island, London. He was so complete, so vital and inventive with the form.

Stevie and I had drinks after the show and we talked quite a bit about his influences and American music in general. We got on immediately as we shared a love for the playing of Albert King amongst others and in my enthusiasm I gave him a full run down of my 45 and 78 record collection which spanned from early Red Prysock, Louis Jordan and the Alan Freed Rock and Roll band through Broonzy, Hooker and Howlin’ Wolf to British Old School like Bond, Mayall and Alexis Korner. I was deeply impressed with Stevie’s knowledge of and interest in British artists like John Renborn and Davy Graham, musicians that I would never have guessed from his playing that he would have had any interest in. I was also hugely flattered when he brought up my own albums Heroes and Scary Monsters, asking how it was working with Robert Fripp and Pete Townshend.

At the end of the evening I took my courage in my hands and asked him if he would have any interest in working with me on my next album which was due to start at the end of the year. Although I had had a big hit in the States with “Fame” a few years previously I was not exactly a household name and was more regarded as an Alternative artist who got lucky. In fact albums like Low, Heroes and Scary Monsters had indeed put me back on a kind of fringe.

And as Stevie’s music was such hardcore blues I expected and would have understood a polite “thanks but no thanks.” You can’t imagine how delighted I was when he accepted the offer on the spot and said he’d love to try out a new kind of record just for the experience. When I asked if touring could also be a possibility he again replied in the affirmative, “’Hell, yea,” he said, “I tour real good”. 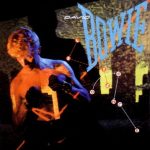 December rolled around and after only a couple or so weeks in the studio Nile Rodgers and I had put down the tracks and vocals of my new album, Let’s Dance. All that was left was to overdub the lead guitar. In the third week of December Stevie strolled into the Power Station and proceeded to rip-up everything one thought about dance records. After his blistering solo on the title song he ambled into the control room and with a cheeky smile on his face, shyly quipped, “That one’s for Albert,” knowing full well that I would understand that King’s own playing was the genesis for that solo. One after another he knocked down solo upon solo, song upon song. In a ridiculously short time he had become midwife to the sound that I had had ringing in my ears all year. A dance form that had its melody rooted in a European sensibility but owed its impact to the blues.

Tour rehearsals were a fairly disjointed affair for me as I was also being shunted here, there and everywhere to do press for the albums release. By the time I got to Dallas the band had already honed the songs to a near finished state. Although pretty disjointed himself as drugs were seriously taking their toll, Stevie was pulling notes out of the air that no one could have dreamed would have worked with my songs. In fact there is a bootleg out there somewhere containing one days playing, a gem for those that can find it.

Apart from a couple of dreadful hangers-on that had fastened themselves onto Stevie’s coat tails, things swung along pretty well. Stevie’s manager had asked the tour promoter if, while on tour, it was possible for Stevie to fly out and do a couple of German TV shows on our days off. The promoter had specified that as long as Stevie made it to the next gig we would have no problem with it. All in all, we were really stoked about getting to Europe and the first gig.

At the end of our work in Dallas the band made its way to New York and I again left for Europe to recommence interviews and TV and such. Then about three days in front of the first gig I got a heartbreaking call from my office. “Are you sitting down, David? I’m afraid you have a new lead guitar player. Stevie is no longer on the tour.”

At the eleventh hour, literally, Stevie’s manager had pulled an unbelievable trick. One half hour before the coach was due to leave for the airport and while Stevie and the rest of the band were loading their bags onto it, the manager had demanded a meeting with the tour promoter in the lobby of the hotel. He then point blank demanded to renegotiate Stevie’s fee, there and then, giving him a higher salary than any other musician on the tour otherwise he would pull Stevie from the tour.

As I was thousands of miles away in Belgium and with twenty minutes to go, our promoter took it upon himself to make a decision which would change the entire sound of the show. “Arnie,” he called to Arnold Dunn, our tour manager, “take Mr. Vaughan’s bags off the coach, he has decided to pass on this tour.”

When the rest of the party arrived in Belgium, Carmine Rojas, my bass player, told me that it was one of the most heartbreaking moments he had ever witnessed on the road, Stevie left standing on the sidewalk with his bags surrounding him. Carmine was convinced that Stevie had no idea that his manager was going to pull such a scam or, if he did, that this guy had convinced Stevie that he could pull it off. Carlos Alomar, the bandleader, had quickly recommended phoning Earl Slick who learned the entire show on the flight over to Belgium.

At first, I was both devastated and angry. But not really sure who to be angry at. The stupid manager who tried a juvenile blackmail or our tour guys for making such an important decision without waiting to get hold of me. You just have to get over these things pretty fast or buckle under, so the tour kicked off and did its thing around the world, Slickly performing like a trooper with no rehearsal whatsoever.

I saw and heard nothing from Stevie till the summer of 1990. We found ourselves both playing gigs in the same city somewhere on tour in America and got together for a while in the afternoon before our respective gigs. The transformation in Stevie was amazing. He had a disposition so sunny and optimistic that he positively shined with happiness and fulfillment. We spent some time talking about our sobriety and the astonishing effect it had had on both our lives. I saw the first twenty minutes or so of his show and then had to leave for my own. Just a few weeks later I heard the news of that terrible crash.

I value the short time we had spent working together as one of the greatest musical experiences of my life and I doubt very much whether that thrill of hearing him slam into my songs with the quiet mastery that was his alone, will ever be repeated quite that overwhelmingly. I’m just so thankful that I got to see him in 1990 in such a high place in his life, contained and truly happy, doing the one thing that he lived for, playing the blues. — David Bowie