Q&A: Zac Wilkerson The Amarillo singer talks about working with Walt Wilkins, revisiting the songs of his youth and dealing with grief on “Dustbowl Soul.” 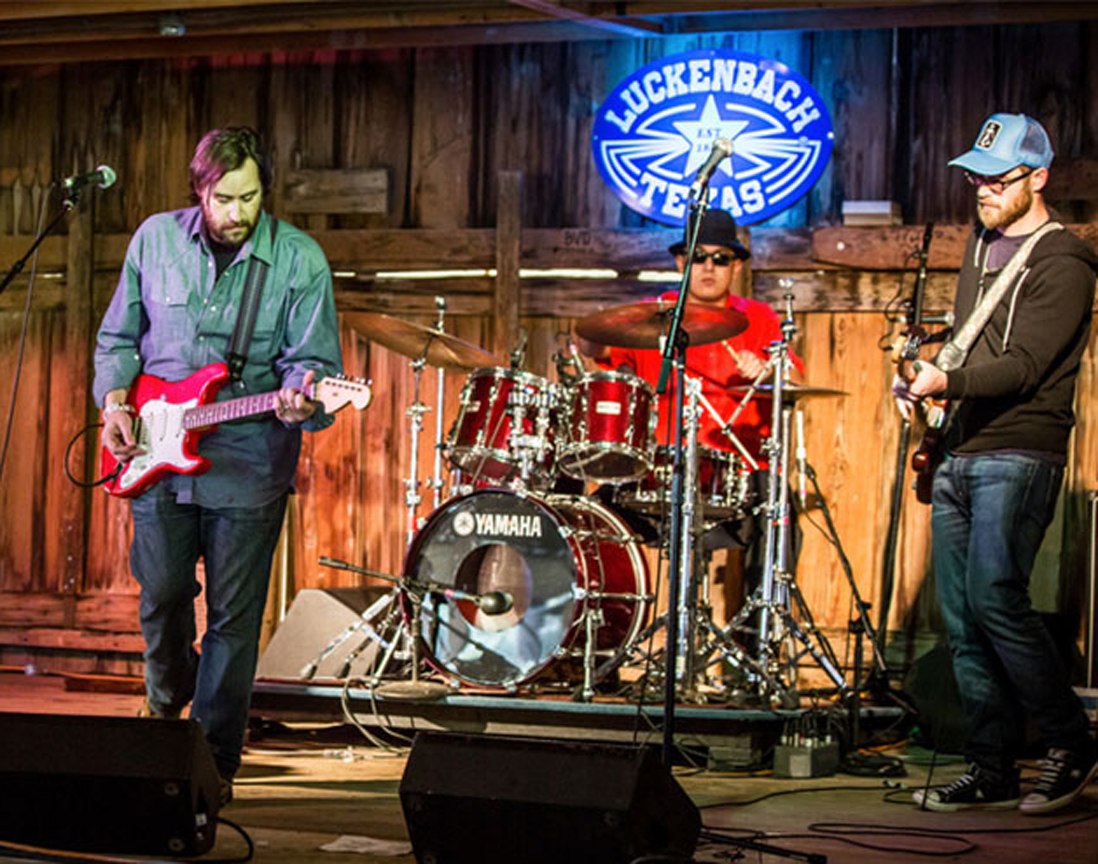 Years back, Texas music pioneer Doug Sahm told Kevin Russell — a pioneering voice in his own right — that there were two kinds of people in Texas: “Those that got West Texas Dust and those that got East Texas Rust.” The story goes that Sahm told Russell, then of the Gourds, that he had plenty of both.

And so, it seems, does Zac Wilkerson. The Amarillo singer-songwriter’s 2014 self-titled debut highlighted his keen sense of rhythm, phrasing, and delivery, but at a mere eight tracks left the listener really wanting more. His aptly titled follow-up, the Walt Wilkins-produced Dustbowl Soul (out today), delivers in spades and finds Wilkerson really finding his stride as both a performer and as a lyricist. Throughout the whole album, you feel the rich, earthy soil and endless horizon. It’s never rushed or too convoluted, allowing plenty of space for Wilkerson and the band to stretch and the songs to breathe.

A few years back, Wilkerson began being called “Laser Pipes” by a few of his West Texas peers — primarily by Brandon Adams. But his lyrics, sharp diction, and stylistic range are all just as impressive as his stirring, expressive vocals. Songs such as “Give Me Just a Moment” and “Baby Don’t Go Crazy” show off his more country side with Bob Wills shuffles and train beats, while the lead single “Tell the Truth” and “The Only One” prove he’s just as adept at delivering simple, down-home fare perfect for back porch listening.

In a way, it’s comfort food — but that doesn’t mean it’s comforting, with the majority of Dustbowl has Wilkerson singing about broken hearts due to young love, worn-in relationships, and the Panhandle. But it’s the closing track — “Scar” — that really feels the heaviest, because it is, having been inspired by the death of a good friend. With Wilkerson curbing his power pipes for an intimacy that feels as though he’s only singing to himself in a secluded room, “Scar” is as disarmingly soothing as it is heart-wrenching and tragic.

What was your mindset going in with this record? How were you wanting to expand what you did on your debut?

We wanted to do something similar to the first record in that we were trying to keep it as pure as possible. At the time, I took in my road band — Mike [Vann] and Paul [Douglass] — and the keyboardist who played on the first record, Chip Dolan. Walt [Wilkins] wanted to have him back, and was cool with doing it; since he played on the first, he kind of knew what to expect. And Ron Flynt is amazing — not just as a producer, but as an engineer. He’s the kind of engineer and mind you like having in the studio; he’s always going to have it perfect by the time you walk in. We came in and it took such a small amount of time to do. We did 16 songs in three days. One of those was “Use Me” by Bill Withers. That was really just a warm-up song for us everyday. We’d play it and kind of get loosened up.

That’s a lot of work in just three days. What made the time go so smoothly?

I had made some charts beforehand just so everyone would know the chords and stuff. We’d kind of play through the song once — no pressure, just us feeling it out. Usually after that, Walt and Ron, anywhere between 45 and 90 seconds, they’d punch back in and tell us to try this different arrangement or something. They’d take what you just played for them and have notes on the song. “Shorten this” or “You don’t need that turnaround” or “Try this.”  It really amazes me just how quick they work. It kind of freaks you out. There wasn’t really any major changes. I think only two songs had major arrangement changes. But other than those, it was something fixed here or there that really made the song work. Most songs, we’d run through three or four times. You get into a groove. We hit a stride on that third day. We did six songs that day.

You said you guys recorded 16 songs. You doubled what you ended up having on Zac Wilkerson.

Yeah. Walt and I had agreed on a minimum of 10. I had 18 songs going in, two of them were covers — Robert Earl Keen’s “If I Were King” and Walt’s “Stand Up 7.” Just over the course of those days, two songs ended up being dropped and “Use Me” being added. Walt really wanted to use “Use Me.” I’d like to really use it too, but it just didn’t feel right for this. Part of it was just because I wasn’t ready. We’d been doing it as a warm-up and so it just ended up recorded. Maybe it’ll find daylight. We dropped the REK song as well because it was kind of covering the same real estate as some of the others. You don’t want to be too redundant in the themes you cover. You have to trim the fat on your records.

You’ve been writing songs for a while now. It’s not just been these last couple of years; you’ve talked about having notebooks at home of half-written pieces and whatnot. Did any of those old songs end up making their way onto here?

“Cinderella” is really old. I started writing that when I was around 15. I was writing it in the hopes of getting a girl’s attention. It didn’t work, but I kept the song anyway. [Laughs]. Going into the studio, I had an idea of what I wanted to do on guitar for it, but Walt and Ron are really good at suggesting things you’d otherwise not think of. They pull it out of you. I was sitting on this couch in the studio and I remembered sitting on my bed when I was a kid writing that song.

You recorded it, so you obviously still feel some connection to it, but do feel different about the song now than you did back when you wrote it? Or does it always just take you right back to that moment? How does a song change over that many years?

I do go back to that moment, but you’re constantly trying to mature the song. You know, I was talking with Courtney Patton one time about the songs you write as a kid. We were joking about the lines that make you cringe now. On “Cinderella,” the lines aren’t exactly eloquent. They’re what you’d write when you’re 15 or 16, but I love the song because of the feel. It covers a lot of ground musically that nothing else on the record does. This will show you what I was thinking when I wrote it. I was listening to a lot of “Oye Como Va” by Santana. I thought, “Who doesn’t love Santana? That’ll get the girl.” She didn’t go for it. [Laughs]. As a writer, you’re trying to lose immaturity. You’re trying to lose those lines that you can see 10 miles away. It’s interesting. Lyrically, that song never really matured past that point, but musically, I’ve had 20 years to play with it. I never thought I’d have a song stick with me that long.

Songs like “Tell the Truth,” “Gateway,” and “Love Me Like You’re Losing Me” are all really new songs. Did they all come up around the same time in this last year?

It’s so weird. A lot of times, I find that songs come up in little groups. You’ll go for months banging your head against the wall and then suddenly, you’ll have three or four songs all click around the same time. Usually, they’re nothing alike either.

The song “Scar” is a really new one as well. You’ve mentioned that it’s about Amarillo songwriter A.J. Swope, who passed away a few years ago.

Yeah. It’s a song that no one’s ever heard. The band hadn’t even heard it until we were in the studio recording it. We’ve only played it that one time. That song started a few days after A.J. died. It sat in a notebook for three years. I wasn’t expecting for it to ever be something I could finish — how are you supposed to be able to write a song about a friend who passed away? I thought it was going to be one of those songs that I’d wrestle with until I died. I had the first three lines of the first verse for three years. It was about a week before we had scheduled the studio time and I was sitting on my back porch. It just started playing in my head so I grabbed my guitar. It’s like playing along to the radio. You start writing down words as best as you can hear them. It really came out of nowhere. I sat on it for a few days. I ended up sending it over to a friend of mine, Josh Duggan, who actually introduced me to A.J. He’d known A.J. for a long time. I sent it over to him asking if he thought it was trite or rushed. He said he thought it was perfect. The first time Walt heard it, he thought it should go on the album, but honestly, I didn’t want to put any kind of mar on A.J.’s name or legacy. I was terrified of putting something out that didn’t honor him correctly — which, I’m not even saying it comes close to living up to him. It ended up being the last thing we recorded.

You’ve never really written about personal loss like this before. Writing about something so intimate and real, did it make you feel vulnerable in some ways?

Very few of my songs have been autobiographical. Very few are about me and my immediate family. “Love Rescued Me,” I wrote that for my dad. “Pieces,” it’s sort of autobiographical. But most of them aren’t. Really, you have to use your imagination. You’re trying to write a three-minute romantic comedy or drama. “Scar” though, it’s 100-percent genuine and real. It leaves you out in the open and vulnerable. I hope the image of grief comes out on there.

Your parents’ record collection has had such an impact on your sound. I’m not sure you could have come up with a better genre label for what you do than the album title, Dustbowl Soul; it really is a mix of country roots and rhythm ’n’ blues. You go from something like “Tell The Truth” to something like “Give Me Just a Moment,” which really could be a Bob Wills shuffle.

Yeah. It’s like Bob Wills and Bill Withers smashed together. The soul music of the Great Lakes area or the Eastern seaboard, it sounds like it’s from there. The area you’re from, I think it always has an impact on what you sound like.

Next post Savannah Welch's family issues statement on her injury