This one’s for him, too … Biographer Tamara Saviano pays tribute to Guy Clark with artist friends Hendrix, Maines, Leigh and McKay in San Marcos

Although it wasn’t quite on the same scale as the star-studded birthday salute held in Guy Clark’s honor five years ago at the Long Center in Austin, that same celebratory spirit was very much in the room when author Tamara Saviano brought her book tour for Without Getting Killed or Caught: The Life and Music of Guy Clark to Superfly’s Lone Star Music Emporium in San Marcos Wednesday night. Saviano’s reading and Q&A session with the audience was preceded by a four-song mini-tribute to Clark by artists Terri Hendrix, Lloyd Maines, Brennen Leigh and Noel McKay.

San Marcos’ own Hendrix, accompanied by Maines, kicked things off with a performance of “The Dark,” the song she covered on the 2011 tribute album, This One’s For Him: A Tribute to Guy Clark (which Saviano co-produced with Shawn Camp.) “When I first heard this song, I put it on my iPod, and I used to go on walks and just listen to it over and over and over,” said Hendrix, noting that it was the song’s “element of light” that really intrigued her. “That’s what really fascinates me about the song — the idea that you can’t really have dark without a little bit of light.”

After Hendrix and Maines’ peformance, Leigh and McKay reached all the way back to Clark’s 1975 debut, Old No. 1, for a spirited run through “A Nickel for the Fiddler,” followed by a pair of songs McKay actually co-wrote with Clark: “Flying and Falling,” and “El Coyote,” the later of which Clark recorded for his final studio album, 2013’s My Favorite Picture of You. McKay credited Schreiner University Professor Kathleen Ann Hudson, founder of the Texas Heritage Music Foundation, for first introducing him to Clark (and vice versa) by “dragging Clark by the arm” to hear a McKay Brothers set at a festival years ago.

“I remember thinking we were bombing, but it must not have been too bad because Guy came backstage afterward, introduced himself, and he had an envelope that he’d ripped apart and written his name and address on, and gave me that and said, ‘Send me everything that you have recorded,'” McKay marveled. So he of course “did exactly that,” and in the ensuing years found himself not only collaborating with Clark on a number of co-writing sessions, but getting to know him as a genuine friend. (It was Clark who personally secured McKay and Leigh two seats, front and center, at his aforementioned birthday tribute in Austin back in 2011.)

Over the course of the eight years she spent researching and writing Without Getting Killed or Caught, Saviano came to know her subject as a genuine friend, too. After Clark’s death on May 17 of this year, it was Saviano who ended up organizing his wake, which entailed getting Clark’s ashes to fellow Texas songwriter Terry Allen in Santa Fe, New Mexico. As Saviano recounts in the book’s epilogue, it was Guy’s wish that Allen, also a renowned visual artist, incorporate his cremains into a sculpture. (Not coincidentally, Allen and Joe Ely will both be joining Saviano for another book reading/tribute this Sunday at 12:30 p.m. at Austin’s Paramount Theater; that event, part of the Texas Book Festival, is free and open to the public.)

“Before I started working with Guy, I might have had him on a pedestal, because I think he’s the best songwriter of my lifetime; Kris Kristofferson used to introduce me and say and say, ‘This is Tamara; Guy Clark is her favorite songwriter,'” Saviano — who happens to manage Kristofferson — told the audience at Superfly’s. She acknowledged that he was also “a flawed man” who could be, as McKay fondly put it before her, ” crusty” — but he had “a heart of gold.” 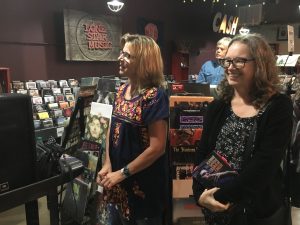 Terri Hendrix and Tamara Saviano, author of “Without Getting Killed or Caught: The Life and Music of Guy Clark.” (Photo by Richard Skanse)

“You know, when I started this, I had my journalist hat on, thinking, ‘OK, I’m going to be objective …,'” she said of writing the book. “Well that kind of went out the window. I think maybe the first two thirds of the book is objective, because I wasn’t there (for that part of his life), so I was able to write as a journalist. But the last part of the book had to be memoir because I was there, and I loved Guy. He was one of my best friends.”

Local writer Diana Finlay Hendricks, who recently put the finishing touches on her own biography of another Texas legend, Delbert McClinton, asked Saviano during the Q&A how and when she knew it was time to “let go” of her nearly decade-long project and submit the book to her publisher.

“I had to let go, because I kept missing deadlines, and I knew it would just never be finished if I didn’t,” Saviano admitted, adding that finally signing off on the work was also a relief. “But letting go now, now that this whole thing has come full circle — well, we’re still doing a film on Guy, so I don’t have to let go all the way yet — but it is weird. Because Guy’s no longer here, and I’m no longer sitting across the kitchen table from him or across the workbench, as a friend or as a writer. And that’s been a very weird adjustment. My car still heads towards Guy’s house all the time.”