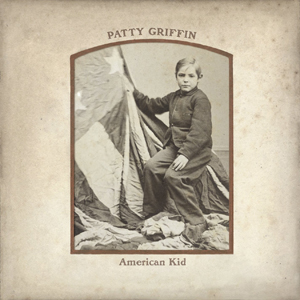 Like most great songwriters, Patty Griffin is not known for happy tunes. But on American Kid, her New West Records debut, she breaks your heart with a single line. Then she skewers its shattered remnants with the next. Even if she were reciting her lyrics as poetry, they would devastate with their passion and precision. But when she adds her clear bell of a soprano, her words ring out as if they are tolling for every lost soul.

“Wild Old Dog” is just one example. At an intimate performance party during this year’s SXSW, she said it was inspired by a dog she spotted trying to outrun a storm in Texarkana. The first line is, “God is a wild old dog someone left out on the highway.” You just know the rest is gonna hurt like hell, and it does — so much, it almost needs a “dog-lovers beware” warning.

Though recorded in Memphis with the Dickinson brothers, most of the album was conceived on drives between Austin and Nashville, with her father’s death as a reference point. In the moving “Faithful Son,” Griffin sings, “Little children came and grew/Moved away and never knew/Who I was or who I am/No they never knew this lonely man.”

There’s more … the gritty dustbowl blues of “Don’t Let Me Die in Florida”; her effortlessly shifting vocals on “That Kind of Lonely”; the haunted ex-soldier in “Not a Bad Man.” Even Lefty Frizzell’s “Mom & Dad’s Waltz,” a declaration of happiness, sounds elegantly mournful.

There is levity, though. “Get Ready Marie,” an Irish mug-clinker complete with “drunken choir,” is, she says, “A sexy song about my grandparents.” But the song that actually conveys her own happiness is the gorgeous “Highway Song,” which she co-wrote and sings with paramour Robert Plant. When they raise their voices in harmony, it’s easy to understand why they fell in love. They’re perfect together. He also lays his Mid-Eastern-influenced modal drone under her high harmony in “Ohio.” Accented with harmonic chords and tabla-like percussion, the effect is transfixing. As is just about every moment of American Kid. — LYNNE MARGOLIS

Next post Guy Clark: "My Favorite Picture of You"