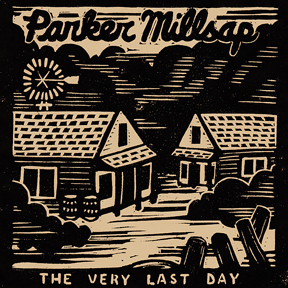 You listen to one too many fire and brimstone sermons as a young ’un growing up in small town Oklahoma, and it’s bound to make an impression. All that biblical sturm und drang certainly had a lasting — and propitious — effect on the potent rootsy blues music 23-year-old Parker Millsap offers up in the here and now on his sophomore release, The Very Last Day. With a distinctive pulpit-pounding voice that screams “Apocalypse Wow!, Millsap — ably assisted by co-producer Gary Paczosa (Alison Kraus, Sarah Jarosz) — both exhorts his growing congregants and reveals himself as a passionate revelator as worthy of heeding as the lyrical scriptures found in the Gospel of Johns, Fulbright and Moreland.

On the foot-stompin,’ hand clappin,’ hot fiddle-infused opening track, “Hades Pleads,” Millsap taps into Greek mythological legend and inhabits the dark lord in all his tempting demonistic glory. He enlists a trio of his youthful musical peers — Sarah Jarosz, Sara Watkins and Aoife O’Donovan — to provide a chorus of angelic voices on “Heaven Sent,” a poignant appeal for acceptance and understanding from a gay son to his earthly father: “Papa, I don’t need a preacher / I ain’t some kind of creature from some old double feature / just wanna make you proud of the kind of love I’ve found, but you say it’s not allowed.”) On the album’s lone cover, “You Gotta Move,” he nimbly straddles the line between the spiritual and the secular, coming across as both a tent revivalist and an urging lover coaching his partner. He duplicates that tightrope feat on “Hands Up,” channeling both a prayer-meeting preacher man and a stick-’em-up thief. And on the title track, Millsap makes heathen and pious alike look forward to the rapturous last days, when the latter will find their just rewards somewhere in the sky and the former will be left behind to either lament their fate or, better yet, celebrate the departure of the sanctimonious to the strains of a roadhouse-worthy idea of amazing grace. In total, The Very Last Days just serves to reinforce what Millsap’s stellar 2012 self-titled debut already made loud and clear: this young artist and prophetic songwriter from the land of Woody is definitely bound for glory. — D.C. BLOOM