Larry Hooper: “No Turning Back” 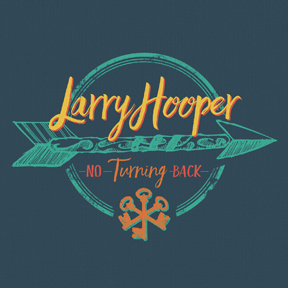 LARRY HOOPER
No Turning Back
www.HooperSongs.com

Despite a career that’s leaned towards the part-time and the off-and-on, Granbury, Texas singer-songwriter Larry Hooper has steadily built a catalog of vivid, gritty, and distinctive work since his 2005 recording debut. And as fully realized a gem as his 2011 album Between Here and the Stars was, his latest — emboldened by a few more years of maturity and inspiration, plus the swaggeringly eclectic production and playing of Jeff Plankenhorn — may well be his greatest. Hooper is a songwriter, first and foremost — his voice falls on the gravel spectrum somewhere between Fred Eaglesmith and Tom Waits, especially when the volume and intensity kick up — and as such he’s pretty much unbound to genre boundaries. The opening salvo of “Daydreams” has more than a touch of Springsteenesque grandeur, and along with the kiss-off waltz of “Cry Me A River” (“every time you start talking / a piece of us dies”), the record kicks off in a fairly radio-friendly direction echoed later on the crisp, pulsing “Mercury Down.” Terrific songs all, and perhaps a gateway to the starker and quirkier routes Hooper’s songwriting takes. There’s biblically-inspired fan fiction of sorts (the moving “Barabbas”), a couple of classic-country collaborations with Courtney Patton (“The Words to My Favorite Memory,” “Practice Makes Perfect”), and a couple of dark, slippery jams that the singer and the band attack with street-preacher intensity (“Better Off with Me Gone,” “Fire and Brimstone”). “When the pin hits the casing, you can’t put the bullet back in the gun,” Hooper growls as the aforementioned “Daydreams” barrels into the chorus. It’s somewhere between an adage, a warning, and a foreshadowing of No Turning Back’s closing title track: When so many of your rounds hit the mark perfectly, who wants their bullets back? — MIKE ETHAN MESSICK