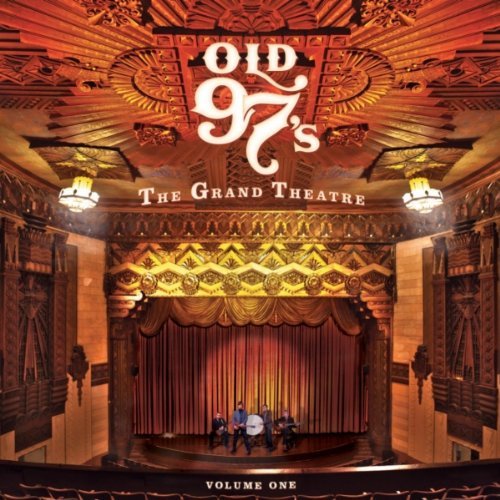 Judging books by their covers is generally frowned upon, but what’s the rule for putting too much stock in a daft title? By any other name, the Old 97’s eighth studio album holds up as a solid, if not quite spectacular, addition to one of the most reliably entertaining catalogs in not only Texas and alt-country music, but indie rock as well. The original gang (singer/guitarist Rhett Miller, bassist/singer Murry Hammond, guitarist Ken Bethea and drummer Philip Peeples) is all still onboard, and the performances here prove everyone is as fit and feisty as ever.

So where’s the beef? Right there in the title: The Grand Theatre, Volume One, which of course implies that this isn’t the whole package. The band and producer Salim Nourallah (who also helmed the Old 97’s’ last album, 2008’s Blame It On Gravity, and Miller’s most recent, self-titled solo album) decided to embrace the sprawl of a double album, recording more than two dozen new songs. But rather than put them all out at once, in the manner of Jamey Johnson’s ambitious The Guitar Song or Wilco’s Being There, they’ve taken Quentin Tarantino’s Kill Bill approach and opted to keep Volume Two in the wings for sequel-style release next year. The problem with that is, on its own, there’s nothing about this first installment of The Grand Theatre that sounds especially grand at all. The theatre in question is an actual venue in England (and “The Grand Theatre” is a track on the album), but using it as the album title hints at an epic sense of purpose that just isn’t even hinted at by the songs. There’s no unifying theme here, at least nothing apparent after several good listens; just 12 good to decent to very good new 97’s tunes, ranging in style from the brooding swagger of the opening title track to the swelling but understated beauty of “Love Is What You Are” to the goofball cow-punk of “A State of Texas,” a throwback to the band’s scrappy youth on Bloodshot Records. Principal songwriter and main frontman Miller is still driving the boat, but Hammond, always good for a ringer, contributes mightily with two clear standouts: “Born to Be in Battle,” a nifty advice-to-a-young-man (presumably his own son, Tex) guidebook set to a John Wayne Western movie soundtrack, and “You Smoke Too Much,” which wouldn’t sound out of place on a greatest hits set by the Britpop band Blur.

All of that should, in theory, be more than enough to satisfy any Old 97’s fan. Song for song, it’s got nothing on 2001’s spectacular Satellite Rides, but with time to grow on you it’s got the goods to equal its immensely charming predecessor, Blame It On Gravity. But the downside is, even clocking in at nearly 49 minutes, the album as a whole leaves you wanting more — if only because you know it’s not whole. There’s no telling how good the rest of the songs waiting on Volume Two are, and maybe attempting to devour both courses all at once would leave some listeners with glutton’s remorse. But that’s what makes double albums, even bad ones, special. There’s always room for debate about songs that could have been trimmed, but there’s also almost always a case to be made, misguided or not, for loving the unwieldy beasts fat and all. A two-hour long Old 97’s opus might not be for all tastes, but triumph or folly, it’d be a wild ride. But chopping it in half just feels, for lack of a more charitable term, half-assed. And knowing just how grand the Old 97’s can be when going full tilt, that’s a bummer. — RICHARD SKANSE