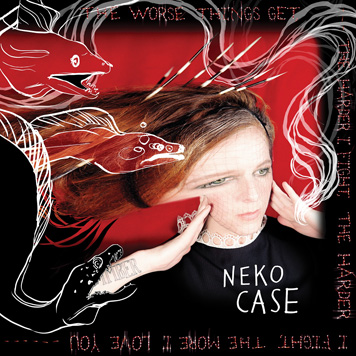 Few things are more delightful and satisfying than a musical artist that arrives full of promise and then even exceeds expectations. That’s exactly what Neko Case has done time and again over her previous six albums; now, on lucky number seven, she takes her greatest and most assured leap forward as a singer, songwriter and rather ingenious and ever-more distinctive musical creator. She has by now left the reductive “alternative country” tag in the dust, even if she travels back to old-as-the-hills Appalachian forms with the ethereal electric/acoustic mix of “Calling Card” and the banjo-driven and vocal-harmony-laced string-band reel “Magpie to the Morning” (one of four extra songs included on the deluxe edition of the album). Like cousins Calexico (whose Joey Burns and Jon Convertino are among Case’s collaborators here), she’s forging a sophisticated modernist roots sound that transcends genre, as on the swirling storm of melody and rhythm with Dada-ist touches that is “Bracing For Sunday.” Case rocks fiercely through the declarative irony of “Man,” weaves a sumptuous a capella vocal tapestry on “Almost Midnight, Honolulu,” and builds a vigorous tour de force on the closing “Ragtime.” She also writes highly original songs laced with stunning wordplay, even when it’s a line like, “Blah blah blah, blah blah blah, we talk about, oh-oh-oh-ho.” To say that this smart and inventive album, so rich with heart and vision, is masterful implies that yes, it is something of a masterpiece, every track a distinctively different gem. But what’s best of all is the promise that, given the trajectory of Case’s growth, there’s more than likely even more glories to come. — ROB PATTERSON

Next post Charlie Faye: "You Were Fine, You Weren’t Even Lonely"