Charlie Faye: “You Were Fine, You Weren’t Even Lonely” 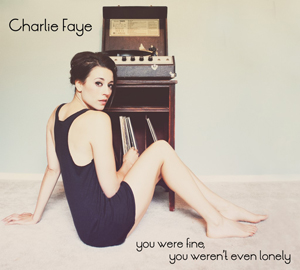 CHARLIE FAYE
You Were Fine, You Weren’t Even Lonely
Wine & Nut Records

The wistfulness permeating — actually, dominating — the jazz-inflected soul-pop of Charlie Faye’s latest album comes from her then-fracturing relationship with guitarist/co-writer Will Sexton, which must have cast a cloud over their recording sessions even though they didn’t split till afterward. Still, awareness of the situation makes the music even more poignant — particularly for listeners who knew them as a couple. The fact that they still perform together is a testament to the strength of their bond — and a reason to invest in the catchy mid-tempo optimism of “Stone in the Road” and “What’s So Special,” which appears in two versions (one of which closes the album on a positive note). Fortunately, even the melancholy songs aren’t woe-is-me litanies; they’re personal, yet almost analytical, as if the act of creating them provided the therapy they needed to accept and move on. And Faye’s gorgeous voice, combined with Sexton’s sometimes shimmering, sometimes twangy guitars (and contributions by Greg Leisz, Andre Moran, and Chris Masterson) creates a mood that overrides all sorrow. Though lyrics and phrasing occasionally struggle against one another, these well-realized songs are fine, indeed. — LYNNE MARGOLIS