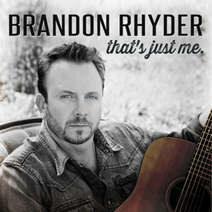 Brandon Rhyder, quite simply, is a damn-good singer. That alone is enough to set him apart on a scene where the first half of the singer-songwriter equation often seems like an afterthought. His voice is exceptionally pure: no grit, no rasp, no drawl — just flat-out golden tones. With That’s Just Me, his first album in four years, Rhyder teams up with co-producer Matt Powell to craft an almost seamless collection of tunes that play rough then reflectively pull back in appropriate fashion, but with the vocals always up front where they belong. There are a couple of missteps: “Undercover Lover” is impossible to take serious due to its silly title and pseudo soft-jazz arrangement; and both the Riders in the Sky-style “Haggard” and the title track suffer from a somewhat generic slice-of-life monotony that fails to deliver much in the way of original insight. But there’s salvation in “Let Him,” an elegantly sincere ode to Rhyder’s spirituality that shows strength in stillness. “Hell’s Gate,” a co-write with Josh Abbott about the fires that have ravaged Texas in recent years, uses that same lyrical sincerity to hammer home a point without bludgeoning. And the terrific “Richest Poor People” is a laid-back folk song that the name-checked Walt Wilkins would be proud to call his own. — KELLY DEARMORE

Previous post Charlie Faye: "You Were Fine, You Weren’t Even Lonely"