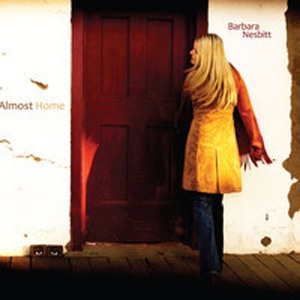 When she’s not knocking back shots of harmonic hooch as one of Austin’s Whiskey Sisters, Barbara Nesbitt serves up a special blend of singer-songwriter fare that is as warm and intoxicating as anything this side of Emmylou Harris and Kasey Chambers. On Almost Home, the flaxen-haired Georgia native’s third solo release, Nesbitt demonstrates a keen understanding that the job of a singer-songwriter is to give a compelling voice to interesting lyrics and universal themes. And boy, does she ever. Hers is a voice of passion and veracity, sharing resolute songs of assurance and candor. She expertly masters the vocal balancing act between optimism and despair on “Like a Good Girl,” a song about longing to repair a soured relationship while honestly admitting that her goods may be a tad too badly damaged to pull it off. On the album’s friskiest track, “Never Been in Love,” Nesbitt goes all coquettish in explaining the dearth of sappy love songs in her repertoire with a series of less-than-amorous admissions: “I’ve been a hippie and I’ve been a punk/I’ve smelled like roses and I’ve stunk like a skunk/I kiss girls, but only when I’m drunk/and I’ve never been in love.” But it’s on tracks like “Graceless” and “Dancing on a Trap Door” where Nesbitt truly unleashes those robust pipes of hers that can convey such heartache and hopefulness — and give the listener that peaceful, easy feeling that this is one Austin sister you’ll want to hear a lot more from. — D.C. BLOOM