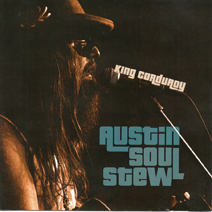 Genuine soul music in the classic mode is not one of the sounds that Austin is generally known for, but Alabama-reared singer-songwriter Kurt McMahan — aka King Corduroy — proves that the Capital City’s players can righteously summon up the spirit of Muscle Shoals and Stax/Volt in their heyday with this tasty and satisfying stew. With a supple growl of a voice and hirsute look that resembles Leon Russell spliced with Dr. John, he has a dead aim for those deliciously deep ’60s R&B grooves and a knack for penning alluring songs that echo the best of the past yet still feel as fresh as tomorrow’s sunrise. All the sweet soul goods are here, such as rollicking horns on the funky Crescent City flavored opener, “What I Need,” call-and-response background vocals throughout, and dynamic duets with Emily Gimble (on the swingin’ “Hagman’s Despair”) and Kate Priestley (on the organ/electric piano-laced lament “Ponderosa Blues”). Austin Soul Stew also takes a dip into the delta blues via the sharp harp and guitar solo flights on “The Ballad of Douglas McAdams.” All told, this King and his court do a princely job of giving a range of real Southern soul styles an exemplary representation of the genre’s eternal charms. — ROB PATTERSON